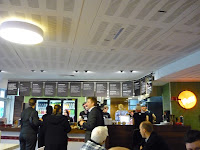 Recently I went to Earl Canteen and liked the food but thought that at $13.50 the price point was a bit high for my liking for a day to day lunch proposition.

It would appear that the market is testing the appetites of the consumer to spend >$10 for lunch with prices everywhere seeming to hit the $9.95 mark and above.

Testing this price point is the recently opened Grill’d at Southgate. Serving from an extensive choice of Burgers, Chips & Drinks, a combination of all 3 would leave one lucky to have change out of $20. 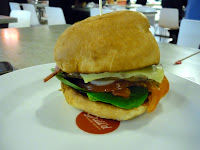 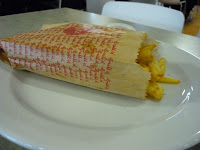 The choice I made for my first Grill’d burger was to go with the safe option of the crispy bacon and cheese burger with a side of chips. This had me conjuring up very fond memories of the delicious burger I had at Chili's too, hopes were high for a quality burger. With the exchange of $15 I walked to my table left to ponder my expectations of the forthcoming burger and at this price point I am beginning to expect a bit more than the other chains, but at the very least a minimum of:

I didn’t have too long to ponder though since by the time I sat down, my burger was on it's way from the pass. Alarm bells went off and not the gentle wake up in the morning alarm bells, but a klaxon blaring WTF am I about to eat alarm bells.

Looking somewhat exposed with nowhere to hide on the naked plate (chips to come later) would be best described as a burger disaster. Between two desiccated buns or “Panini” was lettuce, tomato, cheese, sauce, bacon and beef pattie. I picked up the burger and in an instant the upmarket veneer of Grill’d was shattered leaving me thinking that I would have been better off with a “little bit schmancy” burger.

Ingredients? The lettuce was a pass, the cheese was a pass. Epic fail to the bun, it was dry and had possibly been toasted hours ago. The pattie was tepid and the bacon was anything but crispy.

Cooking? Well there wasn’t any really. If the burger was “cooked” in the time it took me to order and sit down I would eat my hat, hat being probably more appetising than the $10.90 burger. If I know anything about bacon it is that crispy bacon is something that needs time and needs to be served straight away.

Flavour? Well the tepid burger led me to do something I rarely do, send it back saying that it is just too cold and not enjoyable. The replacement came out and while being a bit warmer on a nicer bun, the bacon was still rubbery with what would appear to be grill marks that had been sprayed on. Not good, not good at all.

Positives? Well the chips were nice, very nice. Crispy chips with rosemary and salt were the highlight in a regrettable culinary adventure.

Afterwards I referred to the Grill’d web site to check that it still commits to “cook to order”. If Grill’d cooks to order then either Grill’d and I have different definitions of what cooked to order is. Alternatively Southgate Grill'd may be an exception since cooking to order is just that, placing raw meat on a grill and cooking until the meat is cooked. Taking a cooked piece of meat and placing it on a grill to the point where it is barely reheated is not cook to order, or at least by my definition and the definition of the average diner.

I could go on, but won’t. The experience was not good, especially at the prices asked.

Are the burgers better at Grill’d? No - and damn expensive.