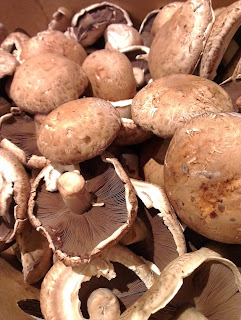 One of my early blog entries - "Best Mushroom Risotto in the world" is also one of my most frequently visited. At the time I didn't actually post a recipe as I felt re-publishing a recipe from a cookbook without consent was inappropriate. Recently Shannon Bennett published his recipe for Mushroom Stock online which is the foundation for what can only be described as the best Mushroom Risotto in the world. Good news!!

I basically follow the recipe without the shaved truffle and add a splash of cream. 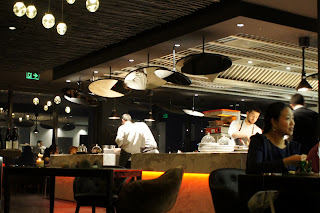 Vue de Monde, wow, best restaurant in Melbourne by a long shot and now has spectacular views to match the food.

Now I have summed up what dining at Vue de Monde is like, I can share with you what the experience of going to Vue is most similar to.

The experience at Vue de Monde in the new and spectacular Rialto location reminded me more of buying a BMW than a typical restaurant experience. Despite the allure of the sensible base model, you end up going up a few models in a blink of an eye. Then once you have selected the model, there are all manner of extras, 18" Tyres? Sat Nav? Matching wine? Nice matching wine? Really, really, nice matching wine? In both situations it is so easy to go beyond your intended budget, but deep down you always knew you were going to. 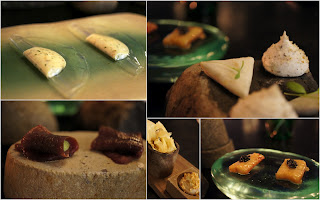 After taking our seats in the rather comfortable and somewhat furry seats we were greeted with an amazing array of canapes. There were a wide range of flavours and textures that served as a palate warmup for the upcoming meal. In particular the salt cured wallaby and smoked eel with white chocolate & caviar canapes stood out. The presentation on various rocks and plates showed that there has been a major plating re-think since our last visit.

The first course to arrive of Spanner crab, kholrabi, avocado & caviar was a great start to proceedings. Avacado and shellfish are a classic pairing for a reason and worked well. Kholrabi and the pig face garnish provided some great texture. 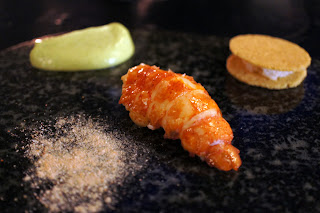 The next course of marron & tarragon butter stood out for many reasons. There was simple understatement, the contrast of the bright marron on the granite slate, very few items on the plate and then the lack of cutlery. Simply pick up the marron, slosh in the butter, dip in the salt and bite. The wager biscuit added some crunch, but this is just genius stuff.

Now we hit the truffle dish of the evening, the playful breakfast style duck egg with truffle, pickle onion, sweet breads covered with generous slices of truffle. Brilliant, not overly contrived and is full of great flavours and textures. Luckily we had plenty of bread to mop the plate as the jus & egg yolk made for a nice gooey sauce. Brilliant. 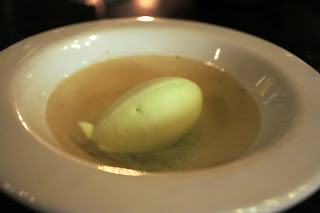 After the openting tour de force of flavour, we were greeted with the palate cleanser of cucumber sorbet and micro herbs that you mash with a pestle after being doused in liquid nitrogen. This is possibly the coolest thing I've done in a dinner and it also a big risk for the team at Vue. I'd hate to imagine the results if the liquid nitrogen were to pour on to ones lap after some vigorous mashing. The cleanser itself? Brilliant.

The next two courses moved along seemingly quite quickly, the Barramundi dish was excellent and similarly the Blackmore Wagyu served two ways as braised and grilled beef was too excellent. The use of a tableside yakitori grill was cute and despite the very brief time on the grill the beef was top grade. Both dishes stood out for being great and very much gimmick free. Double Brilliant. 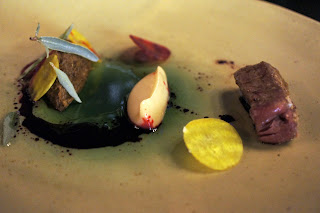 Along with the food, I should also mention the wine. When it comes to matching wine, I've been stung before where pours are somewhat underwhelming and some selections have seem interesting, but not interesting good. Fortunately we had an excellent sommelier who was clear with pour, price and quality upfront so we knew what to expect. We certainly got a range of enjoyable wines and when there is Dom included, it's even better. 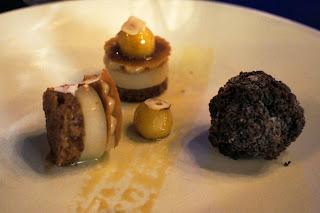 After another palate cleanser we moved to dessert and again things have changed. I've always enjoyed desserts at Vue and the first dessert of spiced pear, caramel and hazelnut was a no disappointment. The textures of crispy thin pastry, spicy pear, caramel and the truffle ice cream was not an instant wow, but by the end of it there was a sense of "I could go on with more of this" 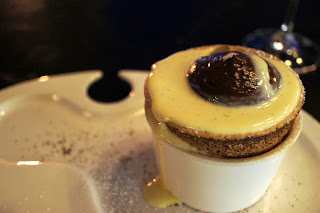 The saddest part our first dessert was knowing the final course was on its way. The chocolate soufflé looked almost pedestrian by Vue standards, but fortunately it made up for it with flavour and what could possibly be the best soufflé I have ever had. So this  sums up the latest incarnation of Vue de Monde. The gimmicks of yesteryear are gone, ill conceived concepts like chickpea chips are nowhere to be seen and instead great flavours and textures a central to the Vue de Monde experience.

So following my BMW analogy to it's logical conclusion one could liken the Vue de Monde experience of yesteryear like the Chris Bangle era of BMW, generally interesting, but often polarizing and occasionally off the mark. Today, both seem to have a strong identity but are more enjoyable across the board coming towards middle ground and despite going way over budget, you leave not caring knowing that the experience is well worth it.