Best Mushroom Risotto in the world 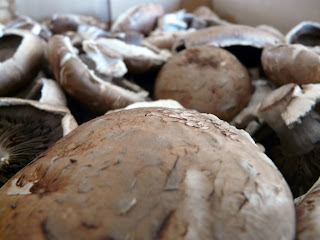 3kg of Swiss Browns to be converted to black stock goodness

***Update - Recipe for the Mushroom Stock is now online***

Well about time I post something out of my kitchen!

So no point beating about the bush, I might as well kick off my first cooking post with my A-game - Mushroom Risotto.

It is quite interesting, most people think they do a "good" mushroom risotto in the same way everyone seems to know how to make good bolognese and know where the best chicken parma in town is.

Well I hate to say it, they are ALL wrong, especially on the risotto front.

Why do I claim mine as the best? Well it comes from good heritage, let me explain.

A few years ago I went to a well known restaurant called Vue du Monde which is arguably the best restaurant in Melbourne. After my trip to Vue I purchased Shannon Bennet's My Vue which is an insightful tome on what you actually get when you go to a place like vue, layer upon layer upon layer of flavours. To make a typical dish requires 30+ ingredients and has several basis of separate recipes to come together as the final product.

So how does this lead to world's best risotto? One simple recipe on page 109 for mushroom stock. Until reading this I never understood why my risotto was missing the mark and it is simple, I was using an inferior stock. Now it would be unfair for me to post the recipe for Shannon's mushroom stock recipe, but I will say that the results are outstanding and will make a HUGE difference. In fact with this alone, good carnaroli rice, some cooked mushrooms for texture a dash of cream and truffle oil at the end (and use the truffle oil sparingly, it should lift, not overpower the dish) you too can have the worlds best mushroom risotto. 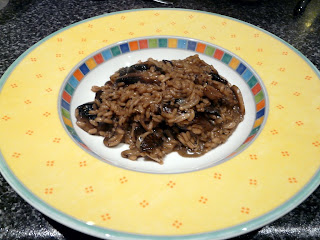 By the way, the 3kg box of mushrooms reduced to 1kg of solid waste, that means there are 2kg of mushroom flavour in the stock which explains why this packs such a mushroom-y punch.

After my initial experimentation's a few years ago I was pleasantly surprised that my rendition of this dish stood up very well next to Vue's version which is why I claim mine as (one of) the Mushroom Risotto's in the world since it can stand in company with Shannon's.

To finish dinner the night I made this, I went with the french classic, Creme Caramel. 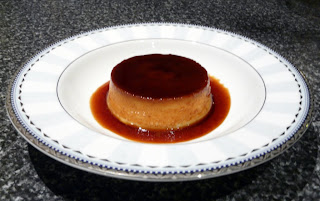 Simple, uncomplicated and delicious. If you have never made one, try it, you will be impressed.

BTW - The mushroom stock is a great basis for pasta sauces such as Mushroom Linguine and if you want to WOW people at your next dinner party, mix some stock, cream and milk, foam with a coffee machine and serve as a mushroom soup cappuccino sprinkled with ground porcini to imitate the cocoa dusting.
at August 22, 2009