My 5 favourite food things about Singapore 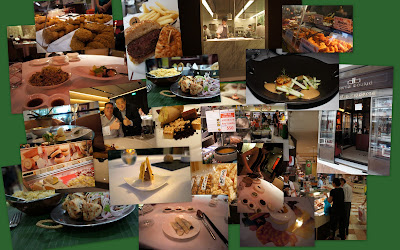 Recently I went on my 4th visit to Singapore in the last 5 years. When mentioning this to others, the most common response I get is “Won’t you get bored?” the answer to this is a definite "No"!

Singapore is well known for great shopping and tourist attractions like Sentosa, the Jurong Bird Park, Zoo’s and the spiffy new Marina Bay Sands Casino that would keep most busy with things to do for at least a week. 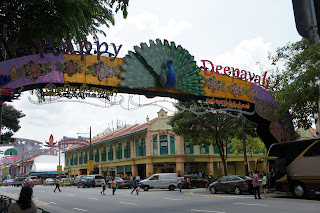 When you get to Little India, you don’t need to see it, you can smell it! The waft of cardamom, incense amongst the open faced restaurants leave you with no confusion as to where you are. Without having traveled to India, I’ve been told that the food in Little India is about as close as one can get outside of India which suits me fine!

If you can eat it in India, you will most likely find it in Little India. The food is cheap and tasty and while I’ve sampled many, it is hard to go past the relatively upmarket Banana Leaf Apollo.

Having eaten at the Banana Leaf Apollo several times, I’ve tried many tasty dishes, but find it hard not to keep coming back to the Dum Biryani,Tandoori Chicken, Naan and an ice cold beer.

If you want a suit, I can also recommend Continental Little India just near the entrance. If you do go though, get ready for some serious haggling. 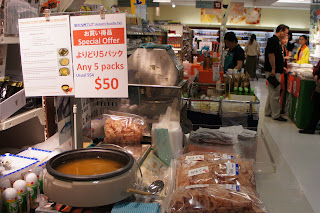 Having been to Japan a few times, one thing I really like is the way they run a department store. A typical department store has everything from Sushi, okonomiyaki, yakitori, chocolate,rice crackers all within metres of each other. It is awesome stuff.

The Japanese department stores on Orchard Rd feature Takashimaya and Isetan and the food basements of these department stores are faithful replicas of their Japanese parents with the added benefit of going through Japanese-English translation!
On my last visit, Isetan were doing their own Japanese food festival which meant along with the regular food, there were many samples to enjoy. If only our quarantine were not so strict I would have brought some of the tastiest Bonito flakes I have ever tried. 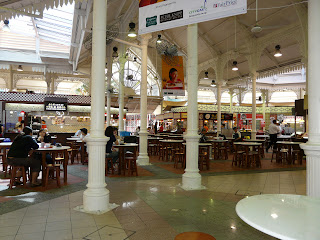 One thing you don’t have to worry about in Singapore is going hungry, food is everywhere and when you get to one of the hawker markets,there are plenty of cheap and delicious options. Almost all the travel guides talk about Newton Circus, but based on the ridiculous level of touts, the out of the way location and the expensive prices, I would steer visitors to the decorative wrought iron Lau Pau Sat which has a wide range of variety. If you want to try a more every day "what the locals would go to" Hawker market then Amoy St is probably the way to go. Nice, but there isn’t a huge amount of variety and would recommend that where you see a queue, it is probably the one to go to! A meal is normally well under $5 with Haianese Chicken rice being a particular favorite of mine.


At the opposite end of the Hawker Market scene, Singapore has a huge fine dining scene. Restaurants are scattered all over Singapore with a new cluster opened at The Marina Bay Sands. Over the past year Tetsuya, Savoy, Daniel Boulud, Wolfgang Puck, Mario Batali have opened in the casino to sit along other restaurants such as the Tippling Club, Blu, Jaan, Gunthers and Salt to name a few. 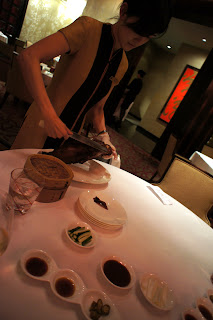 My recent trip included a great degustation experience at Blu, some of the best Cantonese food I’ve enjoyed with some ridiculously crispy Peking duck at Shang Palace and the mother of all burgers at DB Bistro Moderne.

The DB Burger which features slow braised short rib, a centre of foie gras encased in prime ground sirloin is perhaps the perfect burger. At $38SGD it did not disappoint.

With all this fine dining, consensus amongst the chefs, restaurateurs and food writers is it is considered a a case of when, not if, the Michelin Guide covers Singapore. 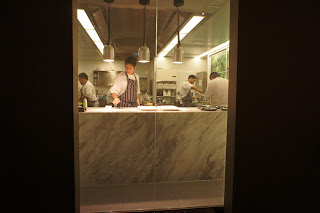 At the top of the tree for dining in Singapore in my opinion is Iggy’s. I’ve been there three times now and seen it ascend in to the Top 50 of the world at number 26. I was concerned that the atmosphere may not be the same having moved from The Regent to The Hilton, but nothing has been lost.
The dining room has lost the counter service that I really enjoyed, but the connection to the kitchen is still there via glass doors with a tricky shutter system that shows a glimpse of the kitchen for about 20 seconds prior to plates being sent out. It gives a great view of the inner operation,but doesn’t distract from the meal.

My most recent visit for lunch didn’t disappoint, the food was of excellent standard. Their signature dish of ebi cappelini still makes me smile along with their liberal use of Foie Gras. I think the winner dish though was the confit duck with sweetcorn puree & Yukon gold potato chips.


At $85++ SGD for lunch it is excellent and Ignatius Chan seems to be asserting himself across the floor a lot more than in previous visits which is most pleasing. While others may match the quality of food, Iggy’s seems to have just a slight edge in creativity and atmosphere that keeps me coming back

So this is my top 5 favorite food things about Singapore. Do I get bored at Singapore? Nope, not at all. 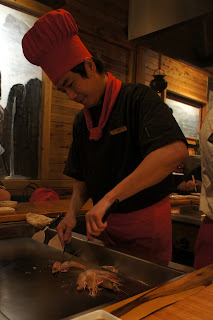 "Food & Egg catching are part of the fun of dining at Tokyo Teppanyaki Restaurant. However, the management will not take any responsibility in case of personal injury or accident"

Not every restaurant has a disclaimer against personal injury due to flying food, however, Tokyo Teppanyaki is not your normal understated Japanese dining experience. Loud, busy and on a Saturday night borderline chaotic, Tokyo Teppanyaki is equal parts food and theatre.

Tokyo Teppanyaki has been operating now for quite some time, It would be over 10 years since my first visit there and I believe it has been running now for close to 20 years which is a lifetime in the restaurant game.

The group I was with all opted for the Osaka set menu that for $65 consisted of, Miso Soup, Spring Roll, California Roll & Deep Fried Chicken, King Prawn, Calamari, Teriyaki Chicken, Tenderloin Steak, Seasonal Grilled Vegetables, Vegetarian Fried Rice and Coffee. Not bad considering mains in some restaurants are nudging these prices.

Once we settled in with a warm sake, the Teppanyaki show commenced. The appetisers of Miso soup and spring roll/california roll and deep fried chicken were all reasonable, not too greasy but not out of this world. They did give us something to enjoy while watching our chef's knife skills on our prawns.

Teppanyaki prawns I think are probably the highlight of teppanyaki and tonight's were as good as I have had, sweet, fresh and with a touch of garlic butter a smash. This set the tone for what would be some good eating.

Without going in to detail about each course, the quality of the produce was never in question, the tenderloin in particular though stood out for it's quality and flavour.

The theatrics component of the night was also good, our chef was engaging but not overbearing and our group emerged with our clothing and dignity intact.

So after all this time, Tokyo Teppanyaki continues to mix theatre with food in fine style. For a group, it is a great experience and hard not to have a great time with quality food.