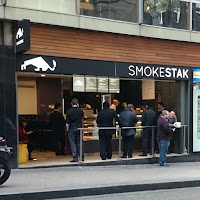 Not that anyone really needed convincing, but American BBQ is the Mexican of 2015. The slow burn of places like Big Boy BBQ and Meat Maiden/Mother has led to "convenience" or fast food BBQ (now there is a contradiction).

Smokestak with the stylized smoker/pig/bull logo is up against if for location. Not really that well placed but makes the most of what little space is there. There are assorted sandwhiches and ribs available and being a sucker for ribs asked for a mix of the pork and beef ribs. 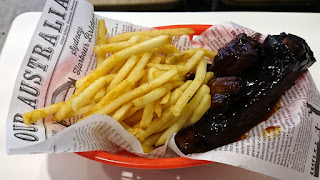 The ribs were promptly served with a nice glaze of bbq sauce and crunchy fries. The pork ribs were well cooked and came straight off the bone. They were perhaps a tad hammy from the smoking process and a little less moist due to being cut in to individual portions rather than a rack. The beef ribs were a bit more moist but not as flavoursome as the pork.


My biggest complaint would be a lack of refresher towlettes, ribs are a risky proposition at best in work attire and keeping oneself clean requires careful management.

The two staffmembers and I had a chat, Smokestak has been open 3 months and without a web site, twitter or instagram, it's biggest failing is probably with social media, or perhaps that is the aim - focus on food rather than twitterverse.

For now, I would say it is worth a visit, i'll probably return before a definitive view, but it is certainly a place I want to succeed. Now just give me a whole rack of ribs!