In my case it was discovering the Iron Chef about 6 years ago. Sure I cooked a lot, and went out to some nice restaurants, but somehow the Iron Chef which showed off luxury ingredients, various styles of cooking and the actual process intrigued me.

It also helped that the campy dubbed style and the flamboyant Chairman Kaga made this in to a Saturday night ritual for me. In fact I became so obsessed that when I went to Japan I went to 3 of their restaurants, Sakai, Kenichi and Ishinabe. (I've also been to American Iron Chef Bobby Flay's very impressive restaurant but my wife doesn't like me categorising this with the Japanese Iron Chef's)

In fact this little number still rates as one of my favourite dishes of all time, a pan fried piece of foie gras. 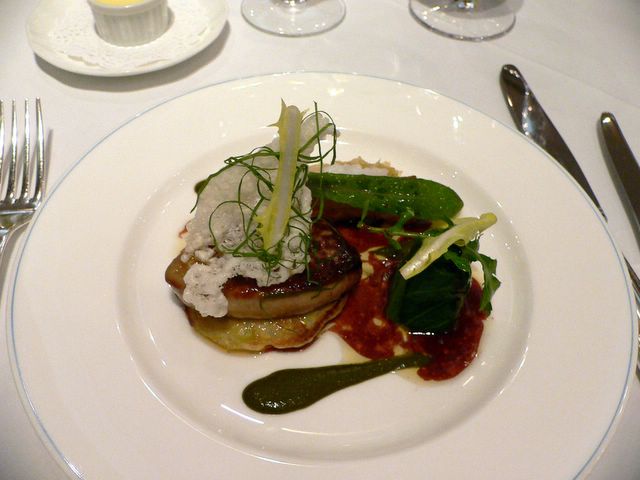 Why I bring this up is I recently came across a little piece of Iron Chef over here in liquid form. The third Japanese Iron Chef, Masaharu Morimoto's Black Soba Ale. 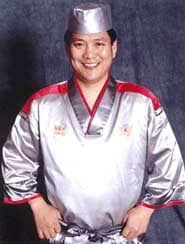 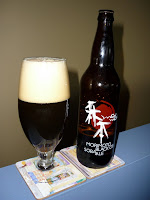 Morimoto was always a bit hard done by as the neo-japanese Iron Chef, he had big shoes to fill following on from Michiba and Nakamura. His creations were interesting, if not always on the money.

If there is a trick with Japanese food it is matching with drinks, wine is a big no go, reds are too overpowering and most whites too fruity. Neutral drinks like Sake and Beer are the best matches so with that in mind I felt it only appropriate that I match with some Sashimi and Sushi.

The beer matched very well, the sweet malt helped to offset the saltiness of the soy and oiliness of the fish despite it's darkness.

The beer was very enjoyable and definately makes me yearn for a return trip to Japan and for that matter to Morimoto's restaurant when I get to the USA next.
at October 09, 2009 No comments: 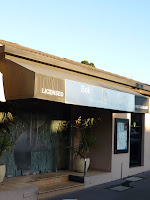 I feel a tinge of sadness when I go to Cantonese restaurants like Bok Choy. They offer great food, often in great environments with good service at very reasonable prices, the sadness is mainly due to the fact I think most people are missing out.

Yet restaurants that simply produce good food doesn't appear to be enough for the hordes of foodies out there wanting to jump on the next trend, bong smoked trout with basil seeds is so 2008.

At times I feel Cantonese is becoming the meat and three veg of dining, fortunately the thoughts of sadness fade once I walk through the doors and inhale the wok smokiness and look across the dark purple dining room of Bok Choy Brighton.

Seated by the window it was reassuring that the two other occupied tables had Chinese diners happily eating away, we ordered champagne, perused the menu and couldn't resist the very reasonably priced $70, 7 course banquet. 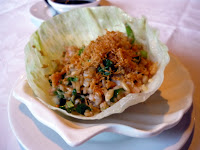 The second dish had high hopes, but didn't quite hit the mark, a deep fried soft shell crab was a bit watery and texture wise didn't quite work. Perhaps the soft shell was trying to counter the batter. The legs were quite nice, but using my basis of "If I were to come back and order ala carte, would I order this dish?" probably not, actually definitely not. However, this dish did answer the age old question "Does everything taste better fried?" The answer came in the form of a lightly battered and fried piece of broccoli - yes.

PEKING DUCK
Third came Peking Duck, the lacquered duck is neatly folded table side and served. Definitely on the top end of the Peking Duck scale, the pancake is light and fluffy, the skin has a nice glassy crack and the meat is tender and bites through with ease. To be honest I could have had 7 courses of this alone. 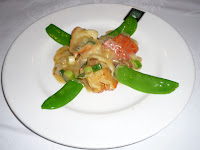 LOBSTER TAIL IN GARLIC BUTTER SAUCE
Next comes Lobster tail in garlic butter sauce, nice chunks of lobster tail with shell attached in a delicious garlic sauce. It was with this course I noticed that what were once shiny pristine plates are showing the battle scars of serving 7 years of food, they were very scratched and could perhaps do with some rotation. 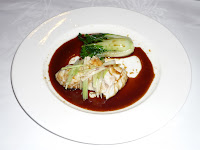 STEAMED WILD BARRAMUNDI WITH SPRING ONION & GINGER SOY SAUCE
One of the downsides of the banquet is that it is normally a greatest hits, no experiments. The next course was a little bit different and a step up over the normal fare. Steamed Wild Barramundi with a ginger and spring onion sauce, this was sensational. The meaty barramundi was cooked perfectly and the oily soy based ginger sauce matched perfectly. This was a highlight a reminder that I need to order more adventurously dammit! 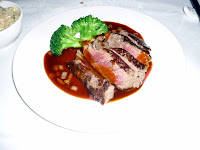 CANTONESE FILLET STEAK
The final course was Cantonese steak, this was served perhaps a bit rarer than what I would normally order, but fortunately the steak was top grade, no sinew or gristle and good texture meant this melted. Some places would charge $35 for this course alone. Matched with the fried rice this certainly left us full and satisfied.

Desert came in the form deep fried ice cream, nothing revolutionary, but the light caramel sauce and ice cream topped off a very enjoyable dinner.

Bok Choy certainly fills the gap between a Kun Ming and a Flower Drum, the reasonable wine list and stand out dishes like the barramundi and Peking duck will get me back there again alone. Would recommend to anyone this side of town, but perhaps not quite worth the drive cross town for, then again I guess that's why the clever chaps have Choi's in Hawthorn!