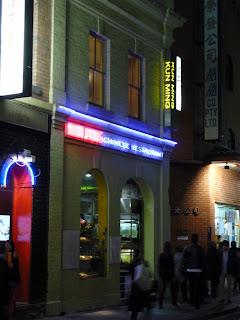 Chinatown on a Friday night is a somewhat busy place to be and after some rather indulgent occasions of late, a more low key dinner with friends was in order. One of the great things about Chinatown is that turnover is such that waiting for a table is normally not an issue and BYO is perfectly acceptable.

Now of course picking a restaurant in Chinatown can be a bit of a roll of the dice, in fact the cynic in me thinks that strips like Chinatown and Lygon St could have a big common communal kitchen with different fronts given that all restaurants tend to have the same menu at identical prices.

Tonight the choice was Kun Ming which is my "regular" for a piece of aus-canto Chinese food. Given the number of Chinese patrons though, my choice is probably a well founded one.

The interior of Kun Ming is bright and open and thankfully post 80's red and jade, it is perhaps a touch cramped but noise isn't an issue. Given it was my friends first time there we played it safe with the banquet which was a bit of a greatest hits, but at a meagre $39 is a great deal. Things kick off with a seafood san choi bow, well presented but we all suffered from the structural integrity of the lettuce, it was too fresh and quite crisp. 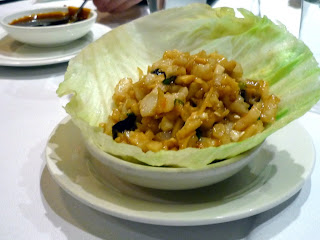 Things moved on to the crab claw which was nice and light and had distinguishable pieces of prawn meat. Perhaps it could have been fried a fraction crispier for my liking, but was not too oily and quite enjoyable. Peking duck was next, nice duck, shame about the pancake which was a bit soggy. 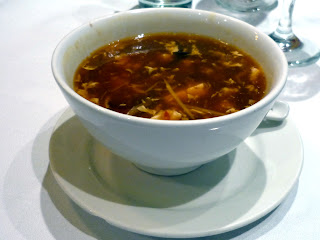 The next course was perhaps the highlight and my must have at Kun Ming, hot and sour soup. As the name suggests, it has heat, it has a nice sourness on the finish and textured well with shrimp, tofu and egg. 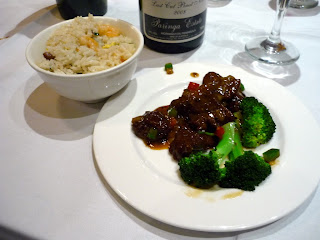 The courses kept flowing at a good pace, Singapore chilli prawns, fish with snowpeas finishing with Cantonese pepper steak with fried rice. All of the courses were exactly as you would expect, no surprises, no disappointments. In fact the fried rice falls in the shade a bit here, it is very nice, light and not too oily.

This brings me to my conclusion on Kun Ming, it serves good food in a pleasent environment at a very cheap price. As I kept reminding one of our party members, we are getting 8 courses for the same price as 1 main at Gingerboy. Yes it is a bit of an unfair comparison, but the difference is I know I'll go back to Kun Ming, can't say I am planning a return to the other any time soon. The only difficulty we had was getting small enough denominations to pay, it really has been a long time since we have eaten out and required change from a $50.

In fact we all agreed to go back soon and try the more adventurous chinese "off menu" items.