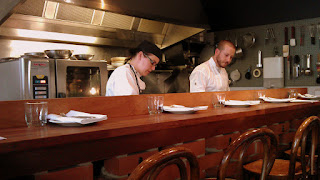 About 10 years ago I worked in Smith St at the Father Flanaghan's end and back then you would describe Smith St as a place where food varied from mediocre to downright dodgy. Wind the clock forward and there is a whole new world of interesting places that makes Brunswick St and Gertrude St look pretty plain.

The latest "darling" of Smith St is the oddly named Huxtable. Why Huxtable? who knows, based on location though, I can only assume it is a bit of an in-joke designed to make white Melburnians think the are part of it and outsiders (i.e. people from the other side of the Yarra) aren't. Either way it doesn't particularly concern me as I am there to sample the much raved about food.

Being a Tuesday night and without reservation, it wasn't too hard to get a table, the dining space of Huxtable is a bit cramped with what feels a haphazard layout and whilst the table of four isn't small there isn't a lot of space for their shared plates. Throw in wine glasses, water glasses and cutlery and it all feels a bit cramped.

Food wise, there is a lengthy list which reads as a global pick & mix of eating, mostly interesting and a few dishes that offer the opportunity to surprise. 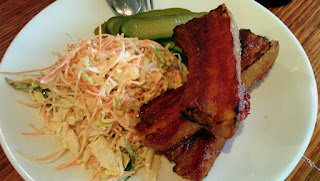 WIN - Korean bbq pork ribs, spicy slaw. Off to a good start, the ribs are served crispy, yielding to a soft inside, with a  generous amount of fat. For some at the table though, the level of fat was too generous. Spicy Slaw and gherkin both add to the dish, helping to break up the fattiness of the ribs. Unfortunately Huxtable follows the annoying trend of serving an odd numbered portion to an even number of diners. 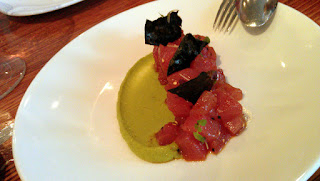 EPIC WIN - togarashi spiced tuna tartare, avocado, crisp nori. I loved this dish, I am a sucker for Japanese influenced food and this was delicious. Juicy chunks of the tuna mixed well with the avocado and the nori providing a great crunch. Would order this again in a flash. 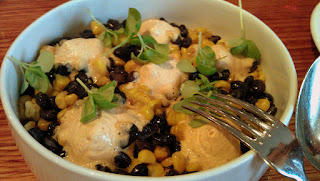 MIDDLE OF THE ROAD - warm salad of sweetcorn, black beans w chipotle & lime crème fraiche. Maybe I am being a bit harsh, but black bean and corn isn't going to get me excited on the best of days. While I didn't think this was a fail, I wouldn't race to order it again. 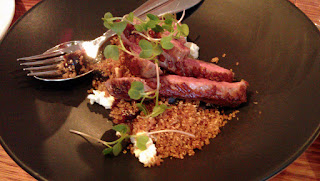 WIN - roasted duck breast, quinoa, hazelnut, pickled cherries, goats cheese. Another great dish here, perfectly cooked duck and the textural addition of the quinoa and and goats cheese make it an interesting dish . Really the only thing holding it back from an epic win was the quantity of duck. Four to five small slices for $27 is a tad stingy for my liking. 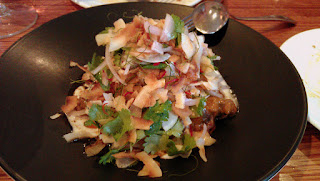 WIN - wagyu & pea eggplant curry, coconut, shallot & lime leaf salad. Another enjoyable dish, leaning towards aromatic rather than hot. The beef was tender and clever use of texture once again makes it far from one dimensional. The only thing I would question is the use of wagyu. Using wagyu is just silly in my opinion and doesn't add anything appreciable to the dish other than the price that can be charged.

Unfortunately by the time we got through the plates which came out with good cadence, we were asked to vacate for another group who did have a booking which saw us come up short for desert. That said, I think we had enough food and the bill was reasonable for the amount of food and wine consumed and the quality. I am still not a convert to shared dining, however, Huxtable does make a pretty good case for it. 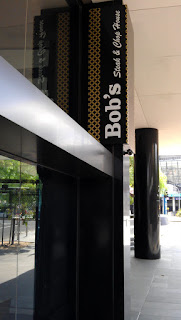 Let's be honest, Docklands is not high on the list of foodie destinations. In fact there are very few reasons to go there, between the run of the mill cafés and restaurants that look like they were built and are still hoping they come there is not a lot to excite.

A more recent arrival to try and buck this wasteland trend is Bob's Steak & Chop House which opened about 10 months ago as the first "Bob's" outside of the USA.

Inside it is quite pleasant, very open and hits the mark of capturing the feel of an American steak house, the uniformed staff remind me of the Shula's steak house and seemed polite and very attentive. To the average Melbournian it is probably a bit uptight, especially to the northern set where sleeves generally refers to tattoo's, but this what they have set out to emulate and is an accurate reflection.

Enough about the decor, let's get on to the food. Sharing the mains was a good opportunity to see what Bob's can do outside of just steak 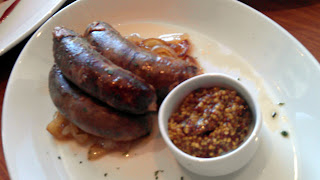 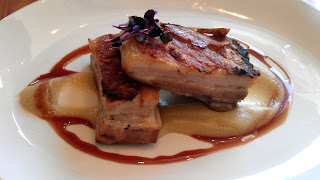 Middle of the road - Crispy Pork Belly (with spiced apple purée & red vinegar reduction)
This was a bit of a dissapointment, the pork belly was crispy but somehow seemed a bit dry and underdone. I like my pork belly to be fork soft and moist with fattiness and this was unfortunately neither. The sauce was good but not enough to recover this 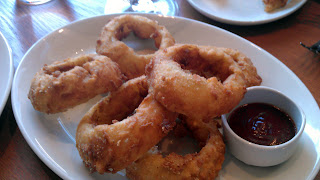 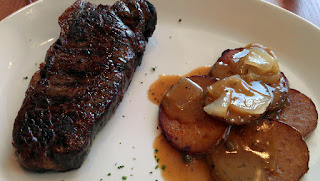 Coming out the size of a Krispy Kreme doughnut, these were the biggest onion rings I think I have ever laid eyes on. Crispy thin batter crunches through to a perfectly cooked ring of onion, best onion rings I have had in Australia - period.

Win - New York Striploin
Let's face it, no matter how good the entrée's are, a steak and chop house is only as good as its meat. The striploin served medium rare as ordered was pure meat perfection, I also loved the grated horseradish, our table went through 3 serves as it was so good. The only thing holding it back from epic win was the skillet potatoes which were in my opinion a bit underdone.


So despite the fact the fitout may make some uncomfortable, Bob's Steak & Chop House hits the mark with attentive service and some spectacular meat 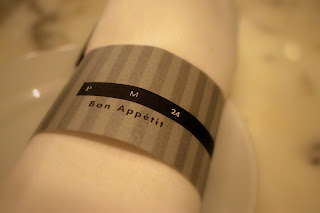 There is little one can write about Phillipe Mouchel that hasn't been written already. The man is a legend of the Melbourne restaurant scene having arrived 20 odd years ago. I first came across his skills at Langton's which left me very impressed and his move to The Brasserie at Crown was always a safe bet for great food. So when I heard that he had signed up to join the Calombaris empire I was concerned that we might have style over substance, naff dish names and expensive food.

Fortunately my concerns as it turns out were all wrong, initial impressions of PM24 are great. There is a good energy about the place, the open kitchen and bistro arrangement is relaxed but not too informal, there were bonus points from the ladies on our table who loved the Eiffel Tower adorned clip on hand bag holders.

What impressed me though is that the man who lends his name to the restaurant is there himself running the pass. Friday night and Phillipe Mouchel is there inspecting dishes, making minor corrections and crossing off the tickets. This makes a change from most restaurants where the chef who put it on the map is spruiking a grocery chain, processed stocks or is hosting a reality TV show.

The menu at PM24 is classic French bistro fare, however, there is a big focus around rotisserie. It is good to see that the rotisserie is being reclaimed as a legitimate form of cooking rather than just something that you see at charcoal chicken shops and Greek family get together's. 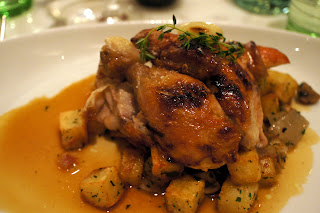 WIN - Organic Milawa Chicken (Rosemary and preserved lemen, sauteed potato, Grand Mere)
It was hard to resist ordering the "Dish of 2011" and  fortunately I was not disappointed. Cooked perfectly with loads of flavour and generously portioned I'd happily have it again. However, When looking at some of the dishes my neighbours had I think they looked and tasted a bit more interesting. It is about as good as chicken gets. 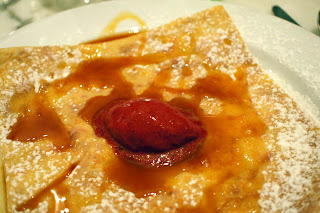 If the rotisserie is centre stage at PM24 then the Crêpe station separated from the main kitchen is like the backup singer, on stage, but won't upstage the star. That's not to say that crêpe's are lacking, light, chewy rather than crispy in texture with a lemon curd filling was mouth puckering sharp, it had been a long time since I enjoyed a crêpe as much as this. Sourness was balanced by the caramel sauce and raspberry sorbet. Would have this again in a flash.

So PM24 continues the trend for Phillipe Mouchel, another winner restaurant (not that I am surprised). I should also mention the range of good quality, well priced French reds by the carafe and the glass. The reasonably priced wine saw us leave full and well relaxed under $100 per head. 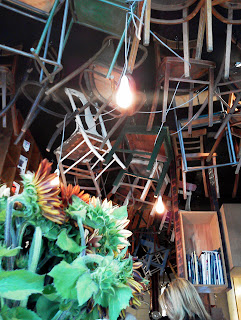 Bizarre name, fantastic coffee. Brother Baba Budan opened up seemingly an eternity ago, back when Mark Dundan was still with St Ali and Seven seeds yet to open. With the cramped interior, communal tables and the crazy chairs on the roof, Brother Baba Budan has spawned many imitators, some have matched the style, few can match their coffee 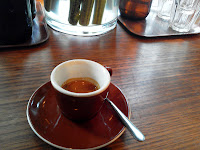 EPIC WIN - Espresso
I'm not a regular espresso drinker, but this one stood out as exceptional. The ever so small extraction had the viscosity more like olive oil than coffee and a smoothness that can only come from exceptional beans, a perfectly clean machine and a skilled barista. The beans roasted over at Seven Seeds had a hint of cherry and while finished with pleasant bitterness it was not extractive at all and certainly no resinous after taste. 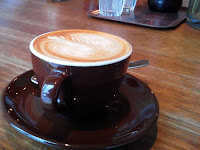 WIN - Strong Flat White
While checking my email I decided to go for my usual choice and while it was good, just paled in the shadow of the espresso perfection. Still a damned good coffee, about the best you will get in the CBD

So despite the fact that years after opening and the lack of a proper sign, Brother Baba Budan is still kicking out the best espresso in town and is winning - epically

After some consideration, a new rating system for consistency has been introduced. Rather than rate based upon a numerical scale which is ambiguous, I've opted for a more efficient system where a rating is awarded based upon my overall experience consisting of level of service, quality of food and value for money at the time of my dining.

EPIC WIN
A restaurant or dish which approaches perfection then high jumps over it. Not even Charlie Sheen on his most "Winning" of days would be able to get near an Epic Win.

WIN
A winner punches above their weight and delivers beyond what the price point, location, or dish may offer. A win is worth going the extra mile for. 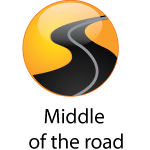 MIDDLE OF THE ROAD
Plain as a milk arrowroot biscuit and as uninspiring as a white Toyota Camry. Not offensive and generally edible middle of the road is not going to excite - about as memorable as a drive through Rowville. 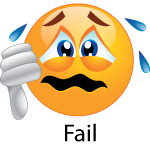 FAIL
To fail, something or maybe everything is wrong. Lack of seasoning, cold, poor cooking or presentation could all be reasons to fail. Soggy fries? Automatic fail. Gritty spinach? That's a fail. Steak not cooked as ordered? Hell, that is a definite fail and bordering on epic. 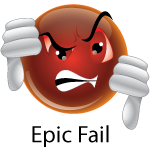 EPIC FAIL
Think HP Touchpad, think Jar Jar Binks, think New Coke and you get the picture of what makes up an Epic Fail. In this day and age one needs to work hard to achieve an Epic Fail, however, they exist. Anything receiving an Epic Fail should be avoided in case their failure is so epic it is actually contagious.
at February 01, 2012 No comments: