I am almost embarrassed to post this one. Yes I like to eat out, yes I do overindulge at times, but this place took things to a whole new level.

When you are an avid foodie, you tend to get in to all manner of food shows. For instance Iron Chef really got me in to Japanese food and technique, which led to my pursuit of dining in their restaurants.

Similarly Gordon Ramsay’s various shows led to his New York Restaurant and Maze Melbourne.
So when a whirlwind business trip to Miami came up not long after watching Man vs Food this combination led me to Shula’s Steak House founded by the NFL Legend Don Shula.

For those that don’t know the show Man vs Food is a show devoted to Adam Richman’s pursuit of “Big Offerings” in American dining. The episode in Miami revolved around his quest to not only put away the Shula 48oz steak but to do it in less than 20 minutes.

Shula’s Miami Beach is located in the mezzanine floor of the Alexander Hotel. The dining room of Shula’s is somewhat subdued with dim lighting, lots of wood panel with B&W photos of Shula’s Superbowl VII and VIII success. Certainly not like a normal sports restaurant or a tacky big food venue. 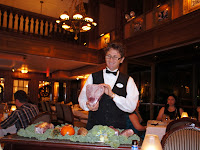 The bow tied waiting staff were very attentive, they ran through the menu with a show and tell of the cuts and despite their best efforts to get us to consider an entrée the order was for “The Big Boy” - The 48oz steak, Medium Rare. 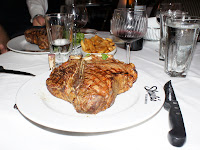 Fortunately the steak was very good quality, not fatty, gristly or chewy. The size was massive and the photos do not do this justice.

We did finish the steak albeit longer than Adam’s record, the biggest challenge in the end was the jaw. Not used to such prolonged bouts of chewing it did take its toll towards the end but we got through and will be inducted in to the 35,000 odd crowd Shula’s 48z club.

Towards the end the flavour of the steak began to fade or as another diner at our table summed it up “quantity has killed quality”.

We did have a side of chips and asparagus which were pleasant enough and we matched the steak up with a great Chilean cabernet sauvignon which was reasonably priced.
So now I am officially on the Shula list