Flower Drum, if it were a band people would be inclined to say it peaked some time ago, released some forgettable records for a good decade and in more recent years has regained it's mojo and while not as influential at the peak of its power is still loved nonetheless as an elder statesmen.

It had been some time since I was at Flower Drum, a good 8 to 9 years when I last went. I was a somewhat less traveled diner and at the time it was a bit of a light bulb moment "This is awesome!". Over the years, time, alternatives and difficulty in booking worked against a repeat visit, but now with online booking available for a Friday night and being able to schedule it in made a long awaited return possible.

Initial impressions of the dining room is that things have not changed much which is not a bad thing. Bucking the trend of recent times to seat diners in near darkness, the bright red room still has a sense of occasion and the tables are still very well spaced.

After organising drinks food started to arrive, the first course of snow crab dumplings were great. Light, fluffy with a nice vinegar to pair with it, the only disappointment were the flecks of crab shell that got in to one of the dumplings. Following was bbq pork with a deep fried apple which solid if not spectacular. 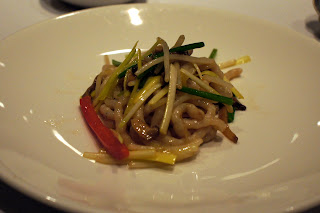 Next up was without doubt the highlight of the night, stir fried wild Barramundi noodles. Barramundi meat that has been pureed and turned in to noodles stir fried with some vegetables. What made this a standout was for a simple looking dish, there is an array of complex flavours, in particular the flavour of  the wok comes through the stir fry. This is black art Cantonese at it's finest, making something simple truly memorable via great technique, no foams or sous vide trickery here.

Following on were a couple of classics which aren't reinventing Cantonese cuisine, but are excellent nonetheless. Quail Sang Choi Bao was great, lots of flavours and textures poking around in the precisely trimmed lettuce cup. Similarly the Peking Duck served table side was another good example of what people love about Flower Drum, there was nothing to dislike about the high quality duck wrapped in delicate pancake, delicious and reliable 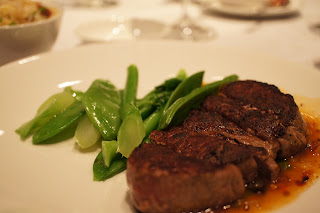 The final course of grain fed Eye Fillet w/Szechuan Sauce would put a lot of so called "Steak Specialists" to shame. One of my enduring memories of my first trip to Flower Drum was how good the steak was and this time was no different. Perfect crust on the outside, medium rare on the inside and served simply with some greens and fried rice.
While my enduring memory of this experience will be the Barramundi noodles, there is nothing to complain about here, nothing at all.

To finish the evening, we went with the "Its so tragically uncool it is almost cool" fried ice cream was nice and despite being deep fried was somehow refreshing with the berry sauce.

So Flower Drum still has "it" in spades and unlike the arms race at the fine dining end is actually relatively cheap for a night out in the fine dining end Melbourne's restaurant scene, in fact dinner here was about the same price as the last time I visited which was the best part of a decade ago. There are still some loutish types frequenting like the diner behind me who requested an iPhone charger and proceeded to talk with his neck angled awkwardly towards the power point as food was served, but the things that matter like service and food are as good as it ever has been. Not bad for a restaurant approaching 40.