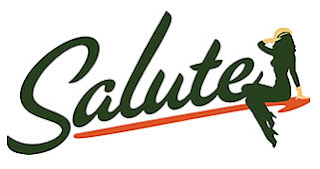 When one thinks RSL, one thinks of Bruce Ruxton, pokies and the moment of silence. So how do I end up at the local RSL where conversation is punctuated by the chinks of the pokies? The answer is I live in Bentleigh. I like the suburb, but dammit, there are very few places to go to for a casual beer with mates.

Unfortunately Bentleigh did not evolve with a set of pubs to be reborn as gastropubs. Instead we have 3 pub's to choose from all fitted with pokies and out of these the RSL would have the least stickiest carpet so despite the quirks, it has become the local venue for a beer. 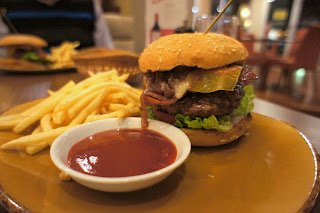 After a favourable review from Burger Adventure, we decided to test the Salute Burger as part of our semi regular catch up for beer. I would say that the recommendation was about right too, between the perfect buns is a stack of what you expect in a good burger - well seasoned and slightly rare grilled beef, crispy bacon, melted cheese with lettuce & tomato. Also a hit were the caramelised onions, very sweet and delicious.

So these are the good things. Bad things? In this day and age I don't understand why pub bistro's charge the same, if not more than a some restaurants and don't offer table service for ordering food and drinks. The fries were also just a pass, crunchy enough to get by, but only just.

While I have no plans to enter in to the world of burger blogging, it is nice to have a spot on burger experience after the recent Grill'd debacle. 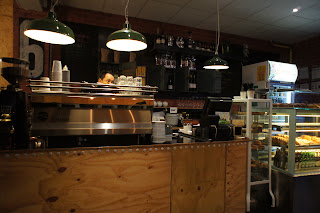 June 22, the day after winter solstice and at 7.50am it is still rather dim with daylight barely breaking through the winter skies. After an early start to the day with my personal trainer to work off some food blog excess I dropped in to not all there in Wells St to undo some of the hard work.

not all there is what I would describe as a post-St. Ali cafe that draws upon good coffee and pays high attention to detail over a modest & affordable menu, this is becoming common all over Melbourne which is definitely a good thing. 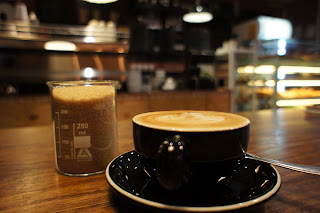 Arriving before the morning rush, the staff were prompt in delivering my coffee order of a strong flat white. The esspresso element was spot on, flavoursome without extracting much in the way of bitterness and possessed a slightly sweet finish. Ten years ago only a handful of places were capable of such finesse, but the post St Ali world, it is now becoming the norm to showcase single origin beans and extract with a touch of lightness. Bitter, over extracted coffee I hear is still on offer at Pellegrini's, the rest of the world has moved on. 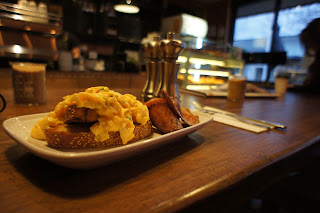 For breakfast, I took a punt on the special of chive & feta scrambled egg with hash brown and bacon and was not disappointed. The eggs were scrambled perfectly with plenty of chives and enough feta to provide texture whilst not overpowering, crispy bacon hit the mark too with the only let down coming from the hash browns which were greasy.

Based on this dish alone, I would happily go back for breakfast and assuming the same standards apply over lunch. Problem is it is a few doors from Peko Peko which would make for a real dilemma.

Out of my kitchen - Mobile Edition 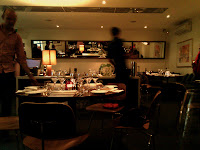 The Palace in Port Melbourne, it is very nondescript location for someone as well known as Luke Mangan to set up shop. Located next to a 7-11 and opposite a strip of garages and panel repair workshops it is barely the Paris end of Melbourne. When you consider anyone with a famous name opening up in town seems to open up at Crown it is hardly the location one would expect someone as well known as Luke Mangan to choose when building the up a Melbourne arm of an empire that extends across Asia in to Singapore and Tokyo. That's not to say that The Palace is a dump, far from it, the warm and inviting interior is more O'Connell's than The Newmarket. 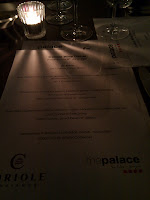 The occasion for venturing to The Palace was to enjoy dinner with Coriole wines. For those in the know, Coriole produce a great range of wine including a number of Italian varietals such as Fiano, Sangiovese and Barbera all the way to their luscious Lloyd Shiraz. At $99 for 4 courses with matching wines it was an offer too good to refuse even for a school night. 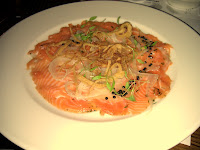 First course was salmon gravlax, not my first choice under normal circumstances, however, I found myself enjoying the dish a lot. Paired with a 2011 Fiano barrel sample there was some debate as to whether or not it was a bit premature (which it was) but it was also good to try a wine at it's very early stages of development. 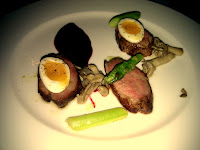 Now I do have to apologise, the photography in this post are with my HTC Desire camera. I did have my Sony nex-5 with me, however, I left my battery at home so the photo's don't really do the dish justice. Shame really since it was not only a pretty dish, it was somewhat delicious. The perfectly cooked duck breast was enhanced by the cinnamon and complimented by the puree and quail eggs. Would travel back for this in a flash and was made more enjoyable by the pairing of the Coriole Sangiovese and Reserve Vita Sangiovese. 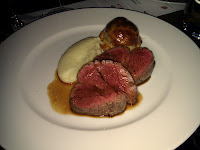 Final course of beef meant one thing, Shiraz time and Coriole know how to do it and do it well. Pairing the beef was the 2008 Estate Shiraz and 2008 Lloyd Shiraz, this food/wine combination is almost worth the $99 admission price alone. By this time in the evening, it was becoming clear that The Palace takes it's produce seriously. The beef was some of the tastiest beef I have had which I am sure was helped by the generous amounts of Lloyd on offer.

Wrapping up the evening with some cheese and Coriole Cabernet Sauvignon I was left with two conclusions, first the dinner was fantastic value and second I was impressed with The Palace. I wouldn't hesitate going back to The Palace, wouldn't hesitate at all.

Melbourne definition - Create a menu of dishes that are smaller than, but priced slightly higher than a typical entree. Expect 1 adult to require at least 1.5-2 plates per person to feel remotely full.

OK that sounds horribly cynical, but having traveled through Spain, both my wallet and I cringe at the thought of tapas in Melbourne. Less to do with the food and more to do with the "I just got a smartphone and didn't realise what uncapped data meant" level of bill shock.

This brings us to Birdman Eating. On a wet, miserable Tuesday we end up at Birdman Eating less out of choice and more out of proximity as it was the closest place to Ladro which we discovered is not open for lunch.

Like any establishment in Gertrude st, it is what the locals would call "delightfully eclectic" with little wooden dolls adorned with feathered wings glued on (Birdman, geddit?) suspended from the ceiling alongside bags of heirloom carrots.

Being a quick lunch, decision making off the moderate tapas menu didn't take too long, slow cooked lamb, heirloom carrots and hare & cavalo nero empanadilla's are hastily ordered with a crossing of fingers that it would suffice for two adults.

Hare is not a common feature in local menu's so with little point of reference we jumped in to the crispy empanadilla's. The hare & cavalo nero filling consisted of dense shredded hare meat with flecks of cavalo nero and behind it was a certain sweetness of what I am assuming is some sherry to bring it together. Overall it was pleasant with a touch of gaminess teaming well with an aioli that I suspect had a touch of mustard. Not a standout dish that I would travel back for , but at least we were served a sensible number of four portions. Odd number tapas' should be banned from ever being served to even numbered diners.

Slow cooked lamb was as one would expect, tender fall apart lamb that was not in any way greasy paired nicely with a mild danish feta and lemon sauce. Perhaps being a winter day the pale celery heart leaves just looked misplaced and a rich tomato feta and oregano assortment on such a harsh winters day would be more fitting.

Served with this were hairloom carrots that were cooked perfectly with a nice tahini yoghurt sauce. The nigella seeds added a much needed crunchy texture and flavour burst, probably as good as carrots get and at $15.50 they would certainly want to be.

So here is the thing, nothing at Birdman Eating really offended me other than being like every other tapas establishment in Melbourne. The food is good but the economics don't stack up.

If you were to propose to someone "I know this place in Gertrude st, the food is reasonable but won't blow you away and lunch is about $25 if you don't mind being hungry by late afternoon otherwise expect to spend $35 and that is with water only" Would you get many takers? Didn't think so.

Birdman Eating - 11/20 - recommended perhaps if you eat like a bird, otherwise neutral