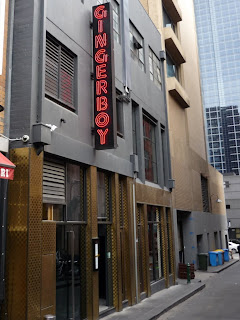 Well it is going to be a tough act to follow on as the next review from Iggy's. Something like an El Bulli might succeed in surpassing Iggy's, but instead Gingerboy is thrown in to the path, but will it be trampled?

Gingerboy is the spin off of Teague Ezard who is a bit of a local legend in the restaurant scene with his famous restaurant Ezard's which I am still yet to try. Gingerboy opened to much fanfare in 2006, I always found it hard to take a restaurant promoting "Hawker" style food at $13.5 for a small plate (think 3 dumplings - a bargain at $4.50 a dumpling) too seriously.

Gingerboy is of course a bit more upmarket than a cockroach ridden market in Kuala Lumpur, In fact the fit out is from the clever folk that fitted out Vue de Monde, making the restaurant very different in feel to the old Madam Fang's.

The visit for lunch was a walk in, the GFC i guess means the need for waiting staff to ask if you have a reservation almost redundant. Seated along the wall on a table for two, the options were expensive dumplings or expensive share plates. We opted for the latter and were sold on to the Fried Corn Cakes which at $8.50 for a bowl of 6 which made me think the waiters all have a sides quota. 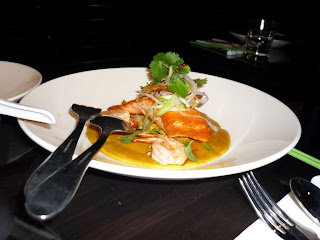 The first share plate arrived, a seared ocean trout that was quite nice, well cooked and immaculately presented, but when this arrived I was starting to have a concern, big "share plate" plus dining plates, plus water glasses, plus lemon lime & bitter glasses, plus the corn cakes was making the tiny table for two a rather cosy place to be. 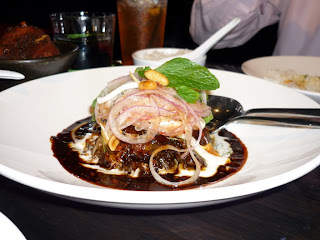 When the ox cheeks arrived, it was a bit like the parking attendant juggling the cars in the already full lot to fit in an SUV, after a lot of backwards and forwards all plates were parked. I don't mind the concept of shared plates, but the poor table was resembling a peak hour train.
The Ox cheeks were interesting, mainly because the saltiness and spice of the sauce masked the flavour of the meat, a lighter meat such as pork would have worked better. I guess it is a sign of the times though, Ox cheeks are very cheffy and seem to be the winter '09 must have for any self respecting menu. 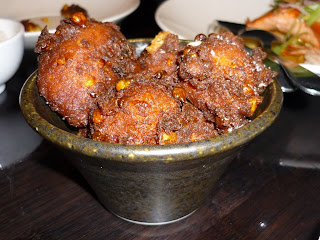 The food is all perfectly acceptable, well flavoured and well presented, but I sense that Teague Ezard has an accountant on his shoulder calculating how much to serve and how much to (over)charge. The most hawker-style experience to be had here however is how quickly you are turned around, seat, eat and go.