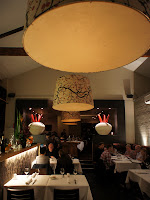 David's web site makes sure you know how good it thinks it is upfront - "Top 50 Best Chinese restaurants outside of China" and "9 Good Food Guide hats in a row" are splashed across the home page. Big claims, big claims indeed.

On a particularly cold Melbourne night we found ourselves at David's located just off Chapel St. Navigating along the dark Cecil pl along skips of rubbish and construction sites helped to make the entrance in to the restaurant all the more warm and comfortable.

In fact the interior is more than just warm it is quite smart proudly saying "I am a Chinese restaurant" without resorting to red carpet, dragons and lanterns.

Being a sucker for "Greatest Hits" along with the others on our table we went with the David's Superior Banquet. At $59 pp it is a steal when you consider the ingredients listed, a trendy tapas bar serving the same based ingredients would lighten your wallet at least 30% more than this with what I refer to as "The Spanish Surcharge"

Our banquet began well with San Choi Bao, perhaps a bit too gingery which overpowered the Lobster. The mixed dim sim basket served nice juicy morsels of flavour, but perhaps not as good as their sister restaurant Oriental Teahouse during Yum Cha. The Shanghai juice pork in particular stood out.

Following on from the dumplings the food ramped up a notch with three plump scallops served in a perfectly balanced ginger & shallot sauce. The scallops cooked perfectly, delivered where it matters most in taste.

Peking Duck was next and this separates the good from the pedestrian in Chinese dining. The duck did not disappoint, tender meat and crispy paper thin skin and semi translucent pancake all spot on and made all the more better when I discovered there were two serves as part of the banquet not one.

The banquet rounded off with two stir fried fish & beef courses. Both good but not quite scaling to the heights of the previous two dishes. Quality of the produce was first class and both had great balance in flavour. The fried rice accompanying the beef delivered too with a great balance of oiliness, egg and other elements such as Chinese sausage.

One thing I have left out so far is the staff, mostly young and quite casual, not casual bad, more casual the opposite of stiff like Flower Drum. This level of casualness was highlighted by desert. Amongst the table of four, I was the only person to elect for the banana fritter with the serve of ice cream. The waiter offered to serve me the banana from the other three to which I declined. A few minutes later we were served three bowls of ice cream and a platter of banana fritter and ice cream! I think the staff chuckled as much as we did, nice touch and not a normal display of humour one would get in most restaurants.

So would I consider David's to be one of the 50 best restaurants outside of China? Well I can't think of 49 better, but think it might set some up for unrealistic expectations in their dining experience. It is good and perhaps another visit through the some menu items I would classify as the road less traveled for a westerner like me would be an ideal way for me to stretch the kitchens talents.

I would put David's in the top group of Melbourne's Chinese restaurants delivering a similar experience to the likes of Choi's, Bok Choy & Tea House.