If you have ever seen the TV show "Extras" you would know one of the running gags between the lead characters Andy Millman and Maggie Jacobs is to pose a question beginning with "Would you rather...." e.g. "Would you rather have a bionic arm or a bionic leg".

While Mrs Parma's apart from having a name that would make the script writers of the carry on movies blush with such a ludicrous double entendre, does offer more than just parma's. Though really it is pointless to have anything else and based on the lack of plates coming from the kitchen sans parma - I think the public has voted. 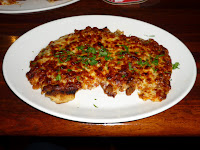 On my most recent visit, I opted for a chicken bolognese parma and if I were to create a list of criteria for a good parma it ticked all the right boxes.

While it is not gourmet food, if I am to ingest such large amounts of cheese covered oily goodness I want it to at least be as good as it can be and at Mrs Parma's it is pretty good.

Mrs Parma's also has an excellent range of microbrewed beers on tap and bottle and judging by the standing room only crowd plenty of people agree that the mix is right.