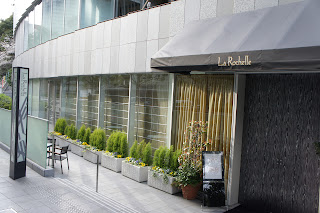 Despite being out of production for over 10 years, Iron Chef still has a cult status amongst foodies around the world. Partly for being a cooking show that was about restaurant level cooking and partly because of the Japanese "campiness". It has also enjoyed years of repeats locally on SBS to the point where it was the Get Smart of Saturday night.

A trip to Tokyo for me wouldn't be complete without at least dropping in to one of the Iron Chef's restaurants. These days, the Iron Chef's are more resteraunters than chefs, but then again how many celebrity chefs aren't? In my last trip to Tokyo I managed to get to three of the restaurants owned by Iron Chefs Sakai, Kenichi and Ishinabi. This time around though with room for only one, the hard decision of going with Sakai again was made.

This time around we went to Sakai's La Rochelle Sanno restaurant which has been open for about 18 months in a business part of Tokyo. The restaurant itself is a more modern and relaxed compared to the Minami-Aoyama restuarant and does well for it.

The food too is also more relaxed to than the last visit. It is still technical and still flavoursome, but the plating is a lot less busy and is more influenced by Japanese techniques. This was evidenced by the amuse bouche featuring a burdock soup and a first course of sashimi.

The next few courses started to show a bit more French flair and technique. The asparagus wrapped prawn was definitely a winner. The prawn was ever so slightly cooked giving it a gelatinous texture and the pairing with asparagus caviar cream worked well. The parsley crusted sea bass was also another winner, the lightness of hand showed off the flavour and texture of the fish. 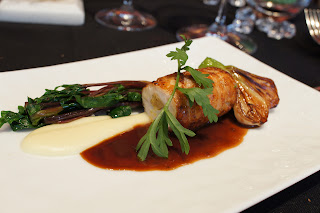 The final savoury course was also my favourite, chicken stuffed with bacon foie gras. The humble chicken was cooked perfectly and the filling of bacon foie gras was enough to add flavour without overpowering or leaving one feeling weighed down. 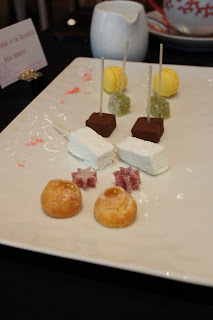 Deserts are also more relaxed in the new La Rochelle. The desert cart offered several choices of cakes, sorbets and preserved fruit. All were of high standard and the plating impeccable. In a nod to cherry blossom season, our plates were painted with sauce blossoms to reflect the season.


Overall this was an excellent lunch experience with no disappointments and impeccable service. It did make me wonder why this restaurant is overlooked a Michelin star in the Tokyo guide. Perhaps there is an anti-Iron Chef sentiment in the Michelin team as it is an excellent dining experience and would be on par with any 1 or 2 Michelin star restaurant that I have been to. I think that is endorsement enough as a restaurant to go to if you are lucky enough to get to Tokyo.