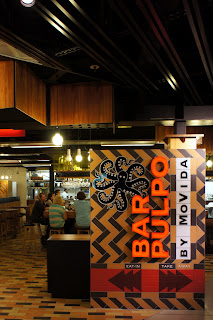 For some reason I have never made it to MoVida, or any of the MoVida spin off's until now. It isn't because  I dislike Spanish food, quite the contrary, it is more likely to do with never being able to get a table without a queue or at a time that suits.

So finally I get the opportunity to sample some of MoVida's food at Melbourne airport, plenty of chairs the only thing required to get a table is an international boarding pass!

The layout is casual and open, not a bad move considering the luggage and carry on that the average traveller has with them. The large TV with departures though leaves you with no mistake that you are at the airport. 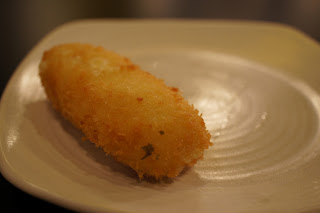 Food wise Movida Bar Pulpo is what one would expect, Tapas & Raciones which for the most part are under $10 and $20 respectively.

Croqueta - Win
The croqueta of leek & cheese was pleasant, not greasy, not too heavy. It would be a struggle to really improve this. 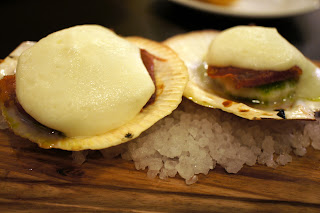 Vieira - Oven baked scallop with Jamon & Potato Foam - Middle of the Road.
The order of scallops were delivered perched on rock salt and looked very pretty. However, the subtle flavour of scallop was overpowered by the jamon. It was still enjoyable, but when jut a shame the balance wasn't quite there. 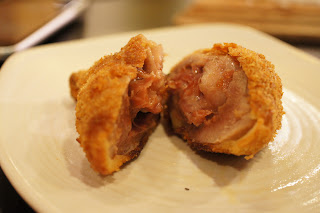 Cordoniz San Jacabo - Boned half quail filled with jamon and mahon cheese - Win
I was bitterly disappointed to miss out on the last lamb cutlet of the day, as a result I went for the quail filled with jamon and cheese as an alternative. Crunchy on the outside and ever so moist on the inside the quail has enough presence to stand up to the jamon. The only criticism was the use of thyme was a bit heavy handed.

Bar Pulpo is certainly a worthy spot to kill some time while waiting for a flight for those of us unfortunate enough not to be in a business lounge. Airport food has come a long way, shame in flight still has a long way to go.