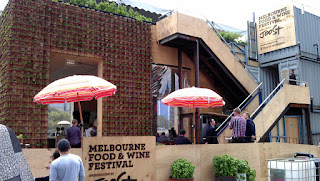 The easiest way to describe Greenhouse by Joost is that it is a concept restaurant in the same way that the Paris Motor show has concept cars. By that I mean a concept car has lots of great ideas, interesting designs and some of these will be adopted in to more mainstream models, Greenhouse by Joost is the same philosophy applied to a restaurant. The only difference of course is that Joost is actually a working concept, most concept car show pieces are made from clay and balsa wood. 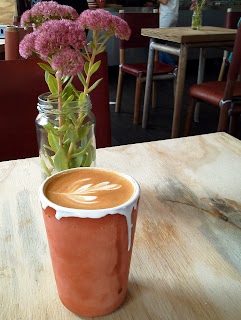 For a full breakdown on the what Greenhouse is and the thoughts behind it, I would recommend visiting the by Joost web site as there are a lot of clever things that he is doing. Clever things aren't just limited to the design and the use of the old construction materials such as irrigation pipes to make surprisingly comfortable chairs, the food and wine seems to be clever too.

The menu constructed by Matt Stone would best be described as earthy with some unusual ingredients such as ox heart which they were sadly sold out of. To kick off proceedings, rather than going for a tempting glass of Innocent Bystander's Mule Shiraz I opted for a strong flat white which was spot on for strength and flavour. The only thing that struck me as odd was the cup was a glazed pot rather than a cup - cute. 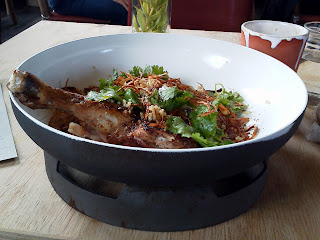 WIN - Spiced chicken, quinoa, yoghurt
Lunch arrived and it was worth the wait, a generous piece of spiced chicken cooked perfectly, crispy on the outside and moist on the inside served in the base of an old gas bottle - cute. Served with quinoa, yoghurt, crispy fried shallot and coriander the dish was nice but could have done with more yoghurt. Overall though it is a clear win and at $25 is quite reasonable when compared to what is on offer in the immediate area. 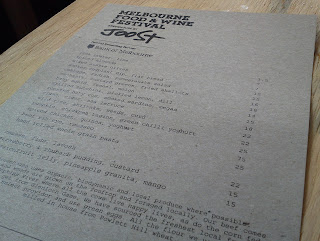 My only gripe is the cutlery. For a restaurant that is all about reuse, why on earth would they use disposable wooden cutlery? They did bring out a metal knife for my chicken, but even then, the wooden fork made hard work of grabbing on to it. I suggested that a scour of Melbourne's op shops would make for a better experience.

Since it is here for a good time, not a long time, I would recommend it is worth taking a look, behind the concept is some very good good.