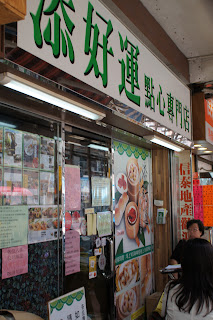 With an exterior covered in scaffolding in a dingy back street of Mong Kok, if it weren't for the mob out the front, you would barely notice it as a restaurant, let alone the cheapest Michelin star restaurant in the world.
Once you get up close, the story doesn't get much better, covered in photo's of their dumplings, post it notes and various press articles it doesn't have the appearance of your typical Michelin fine diner. Unlike most Michelin fine diners, there are no of reservations. You want to eat at Tim Ho Wan, be prepared to queue.

The queue system is basic but efficient, locals get a yellow menu in Cantonese, gwailo's get one in white, on it a number is written and the wait begins. Getting there around 12:45 was a bit risky, I was expecting at least a 30 minute queue, but within 20 minutes we were in with our order placed and expectations set for some great dumplings. Orders are placed upfront and we weren't game to risk being unable to re-order so we ordered what most would consider a very generous set. The interior at Tim Ho Wan matches the exterior, very basic with tables literally next to each other and not much room to move. Not a restaurant for the claustrophobic. 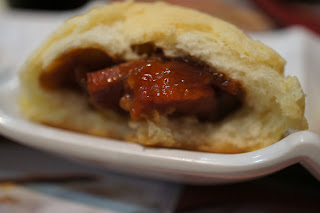 Without too much of a wait, first dish arrives and with this things got off to a great start, the baked pork buns were superb. The buns were very short and the bbq pork inside simply perfect. The surface of the buns were coated like the melon bread one would get a breadtop. It doesn't take long for one to forget the details of the environment realise the food here is pretty special. 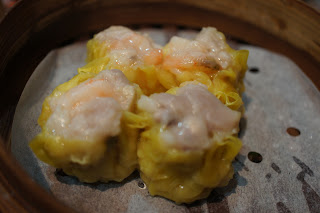 During the course of lunch we sampled 8 dishes, with the exception the fried noodles all were exceptional. The highlights other than the baked buns were the shrimp dumplings which were possibly the best dumplings I have ever had. The filling was light and the skin translucent, firm but not chewy and not sticky, I was very glad that we ordered an extra serve.

Of course the question readers will want to know is, how cheap is the cheapest Michelin Star restaurant in the world? Very cheap, lunch for two a mere $25 AUD total, yep, $12 each, less than the cost of one plate at some Yum Cha restaurants.
Don't look for white linen, don't look for a wine list, just look for the one of the best value dining experiences on the planet.