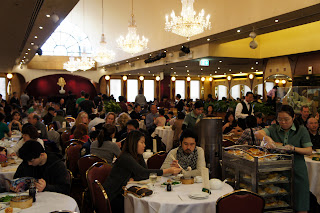 For all the concerns held over Google and privacy, there are moments when I think "Google, I could kiss you".

The cause for my Google joy was courtesy of results provided from searching "Best yum cha in Sydney". The results displayed on my android hand set led me to a SMH article and of the 10 yum cha restaurants listed Marigold was the closest to satisfy my dumpling craving.

Situated on Level 5, there is no street frontage and no way that an out-of-towner like I would walk by and think "That looks good, I'll give that a go". In fact the short elevator ride gives no clue as to what you will enter when the doors open. A massive dining room that can seat up to 600 diners and a parade of yum cha carts slowly circling the buzzing restaurant. 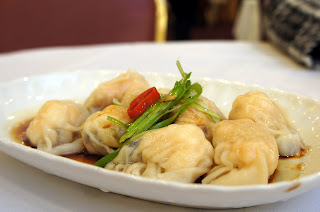 Somehow we managed to time it for instant seating and almost immediately we were asked if we would like some prawn dumpling from a lady carrying these by hand rather than by cart. These set a high bar, light smooth filling, well seasoned and cooked perfectly. 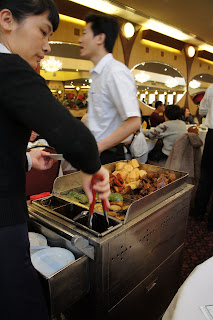 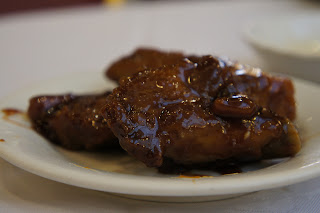 Along with the usual yum cha carts, there were a few carts that offered less common yum cha fare. The station serving sticky pork short ribs is an example of this and I have to say I wish it were more common. The ribs were cooked to pull apart tender and coated in a sweet sauce that bordered on crystallizing with the amount of sugar in it, but they were simply amazing. 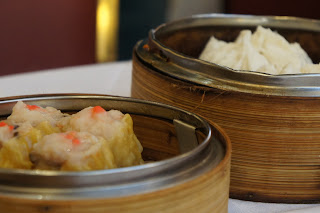 Over the course of yum cha, there was nothing to disappoint. No gristly fillings, no over-steamed dumplings and a ton of choice. 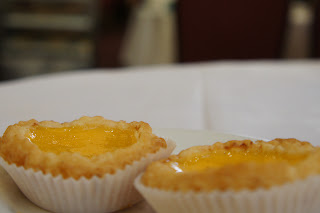 Chinese cuisine in general is not known for great desserts, finishing the meal with the desert cart is always a risk of leaving with disappointment. The egg custard tarts at Marigold definitely do not disappoint, served nice and hot with a good amount of sweetness, they finish the meal perfectly.

Thanks Google and thanks Marigold for some great yum cha