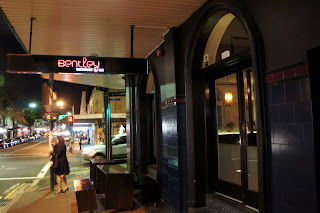 With short notice, it is hard to get in to the better known Sydney restaurants. Marque - fail, Becasse - fail, Sepia -fail, Tetsuya's - fail. After discussing my challenges with the receptionist at Becasse, I was put on to Bentley and after a quick check online, we were booked.

Bentley is a few minutes out of the CBD in Surry Hills and manages to run a fine dining establishment out of an old bar with a certain relaxed feel to it. In fact it would be similar in feel to anyone who has been to Cumulus Inc. or Cutler and Co. as the same design team put this together and I have to say it works.

Arriving a bit early, there was space at the bar to enjoy a cocktail and take in the atmosphere. For a restaurant with two SMH GFG hats, it is very relaxed with a great buzz. No stuffiness, no preciousness and everything seemed to run smoothly which is always a good sign.

Once seated and presented with the menu, it didn't take long to order "Tasting menu with matching wines thanks" and with that dinner commenced.

The first two courses came out in relatively quick succession. The mud crab started proceedings and set the bar high. Delicious crab mixed with sweetcorn puree sandwiched between two layers of brik pastry. The pastry was the key to bringing this all together, good stuff indeed.

Next was the kingfish, this too was a smash, with the lightly poached kingfish enhanced by the roe and broth surrounding it.

After a solid start, things got a bit rocky with the next two courses. The jamon poached tuna seemed a bit lost with the tuna not really benefiting from any of the accompaniments. Perhaps it is my love of simple tuna sashimi that meant that the treatment of the tuna was a bit lost, or perhaps it was the piece being an off cut. In fact one of the two plates had a seam of sinew which is not expected at a restaurant like this.

The Balmian bug similarly seemed a bit lost, the delicate meat was overpowered by the strong flavours of the sweetbread and blackbean. At this point, I also wondered if there was an aversion to cooking anything "well" in the kitchen. The bug was translucent and while I appreciate sous vide techniques, precision control and cooking until protein sets, I do wonder if at times this is done to the detriment of what actually tastes best.

After a solid start, things were getting shaky.

Fortunately things turned around with the next two courses, the pork belly with wattle and garlic milk was a good example of complimenting rather than overpowering. The Black Angus beef offered similar balance with an element of surprise, the small pile of licorice powder offered a chance to mix two flavours most wouldn't dare, beef and licorice and surprisingly it works. 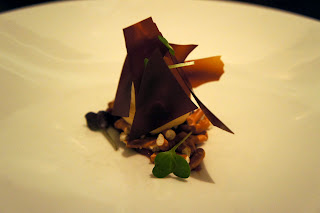 Next came the segue from savoury to sweet. Years on from dining there I still recall how appalled I was with Attica's "Terroir", so my skepticism level was high with this course. Once I got me spoon in to it though, there was no need to worry. The shiny shards of Vegemite mixed perfectly with the cream cheese and pretzel. The quince at the bottom then brings sweetness as you get to the end of the dish. Clever, inventive, delicious.

Finishing off the meal we were treated with two deserts, first off the palate cleanser of caramelised pineapple with beer sorbet. I loved this dish, the beer sorbet offered sweetness upfront but had a definite hop bitterness at the end.

The final course of Liquid Mandarin with Licorice and Dark chocolate was a perfect way to finish. The liquid mandarin was encased in the chocolate cylinder, with a crack of the spoon the plate was flooded with mandarin sauce. The ice cream, the freeze dried mandarin, the chocolate and licorice all combined in to one of the best desert plates I have had.

Complimenting all of this were matching wines from Australia, France and Italy. Each course was paired with its own wine and they all brought something to the dishes served, great value and definitely recommended.

So my final thoughts on Bentley are a conflicting, the food was quite good value for Sydney dining, but when there are some dishes that are a let down that lowered the overall satisfaction. I would recommend it and at the price it is a more palatable option than the likes of Quay which is now $225 for food alone vs $190 for food and wine at Bentley. I would also go again, but with more notice though I most likely end up at Marque or the ever elusive Tetsuya's