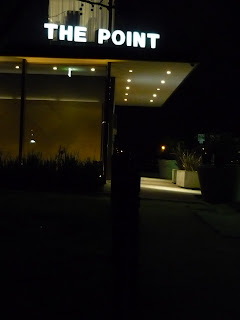 If you listen to the average restaurateur on TV, the general claim is that 99.999 out of 100 restaurants close within the first day of trading and that 99% in fact have the half life of Roentgenium. Not good odds, not good odds at all.

I pondered this as I arrived for our booking at The Point, a restaurant that seems to have been around forever. With a great view over Albert Park Lake and St Kilda Rd, The Point does not suffer from a lack of scenery and the dining room with its recent makeover is a nice comfortable place to be seated. I have to respect the that The Point has continued to keep going on and seems quite comfortable with it's place in the Melbourne restaurant scene.

The Point isn't likely to be high on the list of the trend followers, it is a long way from being the latest trendy restaurant, it is no Vue, Rockpool, Momo or Hellenic Republic and doesn't feature any sort of eco-concept that is saving children in Africa. In many respects The Point is the antithesis of this, the main concept at The Point is beef. Not very trendy at all and I like it!

To say The Point is a steak restaurant though is a bit of an insult, head chef Scott Pickett trained in some very good European kitchens including the 3 michelin starred The Square in London. Scott's appointment wasn't flagged with a huge amount of fanfare, but his profile has steadily risen and with good reason. 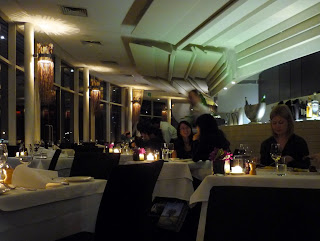 Before I dive in to the critiquing of the food though, there was a small bone to pick with the waiting staff. As the first to arrive, I enjoyed the view with a nice glass of Knappstein Lager (Best lager in Australia by a long way), upon my wife's arrival she was asked if she cared for a drink. Upon asking for a glass of champagne, the waiter poured a glass of Yarrabank, a big no no. Yarrabank is all good, but it is no Gosset either. 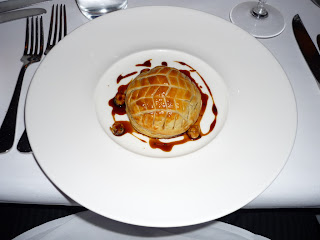 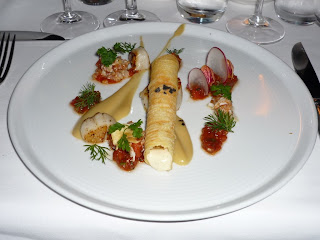 Despite the temptation to try the degustation menu, the table of four decided a more traditional 3 course affair was the way to go. The menu is quite ambitious and diverse for a restaurant that is known mainly for steak, apart from usual beef-grill dishes there was a wide range of seafood and light meat dishes for both entree and main.

The table went 4 ways with entree selection and each of us were suitably impressed, a light Tagliatelle of seafood and a macaroni with carbonara foam and jamon comsomme impressed the ladies of the table. The Mud Crab & Scallop entree was exquisitely plated, it looked like it would fit in a Vue while the Pithivier of quail was a nice understated dish that made good use of the quail and liver. 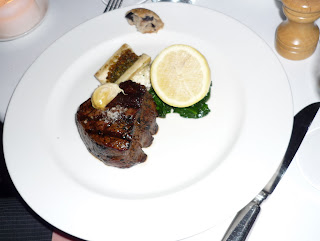 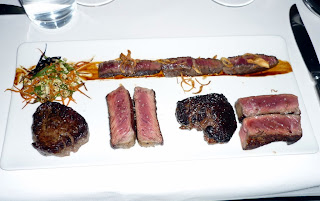 Mains on the other hand were a bit more predictable, while on any given night I would go for any of the regular mains, it is hard to go past the steak that is amongst the first picks from Tasman's lots. The ladies selected Pasture fed eye fillet upon the restaurant managers recommendation, the guys however couldn't go past the Beef Tasting Plate and why not, it answers the age old question of grain vs grass fed and eye fillet vs porterhouse. All steaks were cooked exactly to the request of each of member of the table and was simply delicious. I have to say the opportunity to enjoy five different kinds of steak was something I couldn't pass up and would say that upon return it would either be Wagyu or Grain Porterhouse! 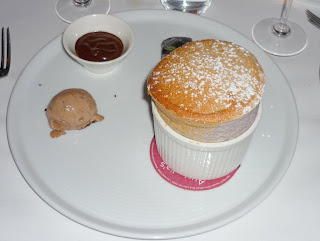 After all that meat, we were glad for a lengthy break to desert, after being sold on glasses of "the special port" which our sommelier assured us was not normally opened (I suspect not normally opened would be when they run out but will let that slide) we ordered desert. The decision here was unanimous, it was the Black forest souffle. Personally I have always been a sucker for anything Black Forest including the demand for about 5 years straight of the same black forest Birthday cake, but I digress.

If The Point were Attica, this would have been called a "Black Forest De-Construction" where the chef has "Deconstructed the elements of a traditional black forest desert for the diner to define their own balance of flavours". Fortunately we are spared such pretentiousness and discover it for ourselves. The desert was one of the best I have had, while it is hard to disappoint me with a souffle, at the same time it is hard to make it stand out and it certainly did here.

So how do I sum up The Point? I was very impressed, the table were very impressed and given the reasonable prices and lack of fuss getting in think it is a bit of a hidden gem. Presentation to match Vue, Steaks to beat Vlado's and understated delivery with pricing to shame both. If young Scott Pickett keeps pushing out food this good, the secret won't stay secret for too long.