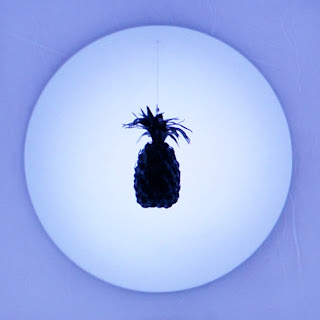 I'll open with two well known facts, everyone knows Heston (yes he has a made single name status like Madonna and Prince) and he is basically a kick ass creative chef so there is no need for a recap of his bio.

So dispensing with a redundant opening, travelling all the way to London, I did consider a trip to The Fat Duck, however, the location in Bray isn't that close and it seems that the press and popular folk in San Pelligrino think that Dinner by Heston is hipper and has more appeal than The Fat Duck which is serving more of a greatest hits than new creations these days.

With that aside, I actually found myself looking forward to the menu at Dinner by Heston as it features dishes that would have feasted upon at the various castles I visited during my trip over the past millenia. Visiting understated places like The Brighton Pavilion shows that the brits have always loved a good feast.

Sitting down in the comfortably modern dining room in the bowels of the Mandarin Oriental Hotel, our table was welcomed by an Australian waitress who walked us through the menu, all very straight forward three courses of your choosing, nothing more than that. After pintxos and several degustation menu's it was quite pleasant to sit down to three courses of my own choosing.

The first course of Lobster & Cucumber Soup (c.1730) was a delightfully light and refreshing starter for a warm summer's evening. Featuring generous pieces of perfectly cooked lobster this was very enjoyable, what also impressed was the terrific weight in the cucumber soup, for a vegetable that is mainly water this had a tremendous viscosity

The following course of Powdered Duck Breast (c.1670) was very good, but not outstanding. The brined duck was perfectly cooked and tender, however the skin could have been a bit crispier. The unctuous sauce was so thick light could barely escape, but did pair well with the duck and the confit fennel. I didn't regret it, but wouldn't say it is a must have either.

So with this we get to the finale, and with that a choice had to be made, the famous Tipsy Cake (c.1810) or the Taffety Tart (c.1660) which I have marveled over time and time again with it's paper thin pastry. In the ended I opted for both as any rational person would. 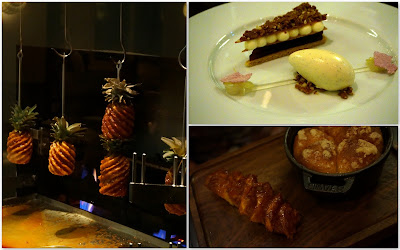 The Taffety Tart came out and was as exceptional as I expected, absolutely mm perfect, every component was spot on, the ice cream, the layers of rose and apple, it had beauty and complexity.

The Tipsy Cake on the other hand is more brawn than beauty, presentation is somewhat rustic with the rich caramelised spit roast pineapple and brioche or "Tipsy Cake" served on a chopping board, it makes up for it's understated appearance with an onslaught of flavour. The brioche turns up the sweetness to 11 with a rich crust of sugar over the light brioche soaking in a boozy apple sauce. The counter to this is the spit roast pineapple which balances things out nicely and almost has a savoury finish to it. Despite the weight and sweetness it is very easy to finish and well worthy of signature dish status.


So with that, Dinner by Heston was over. A very enjoyable experience, it was fun, it was casual and most importantly it was delicious. Compared to some other restaurants I have been to lately, it was great to see the staff enjoyed themselves as much as the diners.

The question I ask myself now, if I were to travel to the other side of the planet again soon and only had a few days in London, would I return? Absolutely.