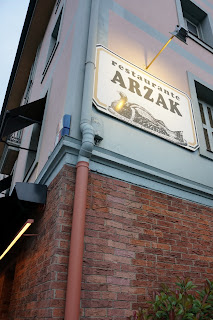 The planned pinnacle of my trip to Europe was to dine at Restaurant Arzak on my 40th birthday and enjoy a spectacular meal as I the one I enjoyed 6 years earlier that I heralded as the best meal ever until I dined at Martín Berasategui just a mere 2 days earlier.

The plans were on track, a lovely day on the San Sebastian beach, a few Cava's and a short taxi ride to the famous Restaurant Arzak. For some reason though, almost as soon as we were in something didn't feel right, the staff greeting us seemed distracted, they guided us through the sliding door to our table in the far corner of the restaurant and we were soon greeted by a very awkward floor manager for the English speaking tables.

We eventually got there with the manager and ordered, our sommelier came by and made some exceptional recomendations and despite speaking barely a word of English he would as it would turn out he would be a rare friendly face in what was to be a dinner to remember for mainly the wrong reasons.

The first course of appetizers arrived, they were ok, Anchovy strawberries were a bit strange and the others were nice, if somewhat unremarkable. In some respects there was an element of trying too hard with the chorizo with tonic served on the bottom of a crushed tonic can.

The first course of cromlech which is a crispy shell filled with a tasty onion and foie gras filling while a bit awkward to eat was quite nice. The fried shell of the cromlech was a bit oily to handle but the crunchy texture with the smooth filling was very nice.

Most of the next few courses were solid, but not overly spectacular, the well cooked lobster and monk fish dishes were well executed, but not displaying a huge amount of flair. The Ovo-lacto egg dish was disappointing, bland and presented like a dish that was a concept in search of flavour.

The final savoury course arrived, a well cooked piece of pigeon was served with a strong resinous sauce and citrus shavings. While it was nice, it was close to going over the line with the citrus dominating the dish. Sitting opposite, my wife stuggled with her main course of salisbury steak so I nobly offered to swap plates and try the wagyu salisbury steak. It became clear quite quickly why there was a struggle, it was bland, poorly cooked and confused.


The dish was a disaster, like the ovo lacto dish, it was a concept looking to become a restaurant dish. The presentation of the meat like as if it were an ice cream didn't make much sense and serving the meat as rare was wrong and the seasoning was non existent.

Then the most unusual thing happened, I gave feedback on the incoherent Salisbury steak, I commented it was undercooked, underseasoned and it was an insult to take something as special as a piece of wagyu and treat it like this. If this were a dish in a cooking show, I am sure the judges would slam the contestant for a complete lack of respect. This was communicated to the english speaking  floor manager and we were told off for not saying something sooner!

About 20 minutes later, Juan Arzak came out to try to explain the dish as we were being served our first dessert. There was no trying to understand my point of view, I was being bombarded by Juan, by the floor manger, we were surrounded by staff trying to serve us dessert oblivious to the conversation going on and in the middle of this I was thinking "What the hell is happening?". Here I am, in a 3 Michelin star restaurant being harassed by the floor manager, the chef, for giving some negative feedback.

From here the night just fell apart, The dessert we were served was like ashes in my mouth, I remember it was OK, but not spectacular. The rest of the conversation and outcome will stay between the table and floor staff of the evening. All I will say is that compared to the service we had a mere two nights earlier at Martín Berasategui it was a complete disgrace.

I left Arzak somewhat troubled. What just occurred? Was it a one off? Further reading and investigation, it would appear my experience was not a one off event in recent times and a very different experience to what I experienced 6 years earlier. Some people have been critical of Arzak for offering a cookie cutter service, I can't argue with that, others for the service, or lack thereof.

After some time to reflect we were either unfortunate to be there there on a night of a difficult service, or something is sorely amiss in Arzak. Bland food, dishes that were trying too hard to mimmick others like Heston and bad, bad service.

Ultimately, if there was one thing that seemed to be amiss, it was no one, and I mean no one at Arzak appeared to be enjoying themselves. The reception, the floor staff and certainly no one at my table, certainly not up to the standard of 3 Michelin stars or a top 10 restaurant in San Pellegrino and if this were to continue like this they will be neither any time soon.