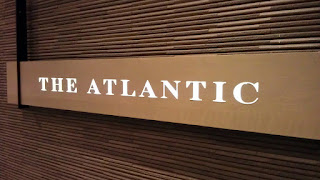 Rolling Stones? Nirvana? Hendrix? When you ask a music fan who they would loved to have seen in their prime, quite often you get the performers aforementioned. If you were to ask a foodie, or more specifically a Melbourne foodie where would they loved to have dined in the past, you would get perhaps Vue du Monde in Carlton, maybe a Stephanie's but chances are you would get Est Est Est or Ondine.

The common factor in both Est Est Est and Ondine was the leadership of Donovan Cooke who worked with Marco Pierre White and came to Australia with a similar level of drive and obsessiveness. The question is, his latest venture - The Atlantic? Is it the culinary equivalent of the 60's Stones, frenetic and full of energy? Or the older stadium performers that are selling out stadiums based on hits from the past rather than the present?

I could continue the analogy's here, but the fact I never made it to Est Est Est or Ondine is still one of the things I feel a tad regretful of today. So it was only a matter of time before I ventured in to the sombre interior of The Atlantic which seems a universe away from the decor described recently in Gourmet Traveller's piece on Est Est Est.

Straying from The Atlantic's seafood bias for my first course, I opted for the very non-pescatarian selection of Pork Belly. The pork belly was all upside. Crispy skin, melting pork and complimented with pineapple cumberland sauce this was very solid start.

Main course of Snapper Fillet with radicchio offered a generous fillet of snapper cooked perfectly that didn't state wood fired in the menu, yet I somehow think this had some wood fired treatment and was all the better for it. While I am normally a red meat diner, I would happily change teams for fish this good any day of the week.


Desert was nice, if not less than spectacular. The pannacotta, pina colada salad and granita was both light and refreshing, but really was nothing spectacular for the price asked. Had it been around $14 instead of $19 I wouldn't object, but this is no Quay snow egg.


So overall the food was solid but didn't deliver a true OMG moment, the atmosphere pleasant but confirmed my initial reservations. The Atlantic is Donovan Cooke's stadium show pleasing a much bigger audience and doing a good job of it. Somehow though I don't think Gourmet Traveller 2021 will reminisce over The Atlantic with the same nostalgia as Est Est Est.