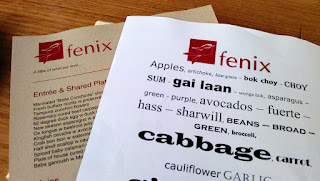 Aussie Rules - No, Cricket - No, Rugby - Not even close. These are the incorrect answers to the question "What is the number one sport that unites Australia?" the correct answer is "Cutting down our tall poppies". Greg Norman will tell you, so will Rupert Murdoch and looking at some of the critiques circulating about Fenix I think Gary Mehigan may have a thing or two to say about our true national past time.

Unless you have been living under a moderately large rock, you would know Gary as one of the Masterchef judges and generally comes off as the lighter hearted judge, likeable, and generally fair in his assessment. Along with this he is one of the owners and public face of Fenix in Richmond.

Fenix has struck me as a place that looks like worth trying if in the general area, not necessarily worthy of a trip to Richmond's Victoria Gardens to get to though. So on a fine sunny Melbourne spring day I found myself at Fenix for a coffee that transitioned in to an unplanned and very fine lunch.

For entree I selected the scallops which were perfectly cooked. Caramalised with a slightly translucent centre, these were delicious. Overall the presentation was great with the shells perched well above the board buried under tasty foam. The accompanying crumbs and puree complimented nicely.

For my main course I chose the Pot roast lamb dish. This was a faultless cracker of a dish and had Gary been there it would be high-fives all round. The lamb rump and neck were both cooked perfectly, the carrot and star anise puree added a vibrancy to the plate that made this visually attractive. The supporting roles of the date puree and carrots should not be underestimated either, visually great and every component played a role. If you were to go to Fenix wanting a "Gary" dish I think this would be the one to go for.

Service from the floor staff was also faultless, both friendly and attentive through lunch. The wine list was good with reasonable markups which makes splashing out for a good bottle more attainable.

So back to my opening, if you were to google "Fenix review" you would find several mixed reviews and if you drill in to the comments sections of The Age or Urbanspoon you would find all manner of disappointed people that I would suggest were dying to go to Fenix to simply say how bad it was. Whilst I wasn't dying to go to Fenix, I can only offer praise for a restaurant producing well cooked, honest food in more than pleasant surroundings. If I were local, I would certainly go back on a regular basis, perhaps I might even go out of my way to get there.