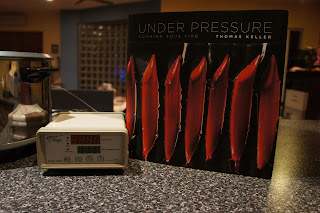 Thomas Keller's Under Pressure next to my Sous Vide Magic.

It can't be that hard can it? I think this is one of those statements made by someone who knows before they even begin, yes it is and definitely will be

Along with eating out, I also enjoy cooking at home. In general I am quite good and can have a go at most recipes and get them right first time. However, alongside the approachable recipes produced by the likes of Stephanie Alexander lies the world of what I would call gastro-porn. These are the two-inch thick hard covered tomes that are equal parts photography and recipe.

I concede I have a decent collection of these books but don't dare have a go at the recipes as they generally take a fleet of people and days of prep to even get close if you stick to them by the rules. What do I mean by rules? No bought stocks, no shortcut of process, no dropping key ingredients. Saying you have cooked a Heston recipe with Campbell's stock is really not far from saying "Look at my Louis Vuitton wallet" that you bought from someone on a street corner.

So with that said, I really wanted to have a go at a recipe from Thomas Keller's under pressure from scratch. My first attempt is his rather minimalist and approachable pork belly recipe as shown below: 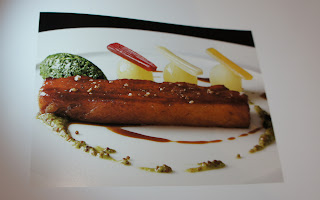 Pretty simple eh? I can have a go at that eh? Well have a go I did. With military planning, I procured the lengthy list of ingredients and produced the recipe as outlined including base stocks - Beef stock, chicken stock, vegetable stock. These in turn were reduced to practically nothing, in fact about 1.5l of stock reduced to 200 ml for the pork sauce which is a great insight as to how a sauce ends up on your plate in a fine dining restaurant. 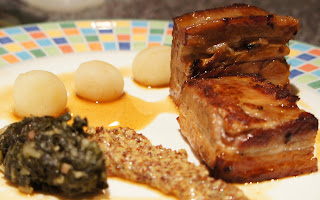 My version, well the only sacrifice I made was the rainbow swiss chard stems on the apple balls as they were unavailable. Start to finish it was several hours of work making the stocks. The pork belly was the easy part, 12 hours at 82.2 degrees and it was a perfect balance of tenderness, texture and fattiness.

Overall I was happy with the result, the plating needs a bit of work, but the flavour of the meat was sensational and every component on the plate served a purpose. The sous vide apple provided a more textured burst than an apple sauce and the pork sauce was also a knockout despite the work.

I would say that I did learn a lot from this dish and while I won't make it again from start to finish in a while, there are many elements I will pick up from this. It also was a good reminder why a Quay or an Iggy's charge for what they do and what separates them from the middle of the pack.
at July 03, 2011