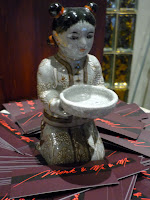 I tend to think one of the keys to a great dining experience is all about context. A great dinner at somewhere like Iggy's would be diluted in a group of 10, similarly some restaurants are just made for group dining. Monk & Me is one of these.

Situated in Camberwell Junction, Malaysian cuisine is not normally what one would consider when going in to perhaps the whitest of Melbourne's suburbs, however, over the road from Rivoli it is a great spot for a group to converge pre-movie.

Turning up for a table of 10 at 7pm about 15 minutes early had me a fraction concerned as the table was not ready, but was confidently told it would be ready at 7pm. True to their word they were on time, they had me thinking Monk & Me should run our train system too! 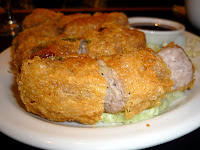 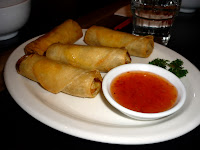 Being a large table I made the executive decision on some starters, which was also my way of ensuring we got lohbak and lots of it. Simply put it is the Malaysian equivalent of a sausage roll. Chicken mince and spice rolled up in bean curd and fried crispy. It rarely disappoints and I can't think of better lohbak than here. The other entree's of Spring Rolls and Curry Puffs were also good, but the lohbak is just a cracker. 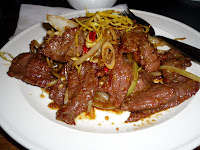 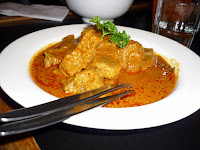 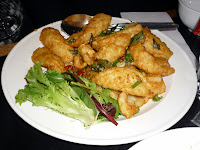 Soon after our mains arrived and this is where I think Malaysian is the vastly underrated as a group dining experience. In front of us were 8 plates of well executed Malaysian food and while I would happily enjoy a full plate of beef rendang, being able to mix around was magnificent. The aforementioned beef rendang is perhaps the finest example I have had of this. The huge tender chunks of beef served in a rich spicy rendang sauce - fantastic.

Decisions, decisions, what would I sample next. The allure of the spice calamari was too hard to resist and my choice rewarded me with crispy, spicy tender calamari. I don't think I have had better anywhere else to be honest, it was butter soft tender and juicy.

From there it just was high after high, the lemongrass beef had the spice of chilli and the fragrance of lemongrass enhancing the tender beef.

Providing some balance to the chilli was the mild but certainly not bland char kway teow noodles and a serve of braised duck that was in no way fit for photo by the time it got to my end of the table.

So in the space of 90 minutes, Monk & Me served fantastic food in a friendly manner to a group of 10 with no complaints all under $30pp excluding drinks. I would consider this to be amongst the best group dining experiences one could have in Melbourne and would highly recommend it. For a table of two? Maybe a fraction noisy, but only because there are so many groups having fun.

Email ThisBlogThis!Share to TwitterShare to FacebookShare to Pinterest
Labels: http://www.blogger.com/img/blank.gif