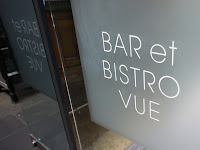 Bistro Vue has always seemed a bit like the odd man out in the Shannon Bennett dining empire, not soaring to the great heights of Vue de Monde, but certainly more expensive than the more approachable Cafe Vue.

It had been a few years since my last visit and was quite interested to see if I would be pleasantly surprised or disappointed.

Walking in, it is exactly as I remembered, very Parisian and as we were seated by our French waiter it was difficult not to get in to the mood for some French bistro dining. 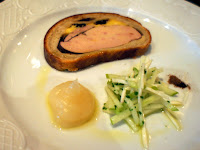 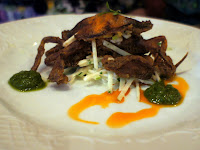 The gallic state of mind developed with a reasonably priced glass of Veuve Cliquot and Foie Gras to start with. When I ordered this, I expected this to be served warm, instead the Foie Gras came out cold, encased in brioche with apple puree and what I suspect was the same celeriac and apple rémoulade that came with the softshell crab entree.

Once the initial disappointment of the cold Foie Gras subsided, I did enjoy it and as it warmed became progressively nicer. The Foie Gras was actually quite light and rather generous, at $38 per serve it is getting up there, but totally enjoyable for any foie gras fan.

I also tried some of the softshell crab entree, it was well cooked, with the rémoulade & mojo sauce complimenting the crab.

For the main course, I asked our French waiter for his steak recommendation. He recommended the Wagyu steak, not the most expensive cut so went with it.

The steak came out perfectly medium rare, the portion was generous to say the least and had good Wagyu richness without being too over the top. The hand cut chips were closer to whole potatoes, however, they were light on the inside and were lightly crispy on the outside. The simple truffle mustard also worked well complimenting, not dominating the dish.

For dessert, I was torn between Souffle and Chocolate Fondant. The waiter dismissed my choices when I asked his thoughts and instructed me to get the Tarte Tatin. For some reason I have never gravitated to Tarte Tatin on any dessert menu but took a leap of faith and waited anxiously with a glass of Sauternes in hand.

I needn't have worried, the waiter came out placed an empty plate in front of me with a cute little copper saucepan of crème anglaise, after a brief dissapearence he returned to flip a pastry coated cast iron pan to reveal one of the most beautiful food sights I have seen. Lifting the pan the table fell in to silence followed by ooooh's at the sight before us - golden apple, syrup thick with spice and vanilla seeds garnished with two vanilla pods on top. As the syrup spilled on to the plate the waiter poured the crème anglaise, this is food porn at it's finest.

All this is good, but the proof is in the eating and the eating is good! Every element of this dish is superb, the apples well cooked and caramelised, great spice in the syrup and crisp puff pastry based. This was a revelation and I am a Tarte Tatin convert and this would easily be in my top 10 desserts of all time.

Wrapping up we were presented a small plate of canelé. They were somewhat "caramelised" on the outside, but they worked well to mop up more of the Tarte Tatin syrup.

So thoughts on Bistro Vue? It is good, very good. Perhaps having Cafe Vue as the outlet for everyday brasserie food has given Bistro Vue the opportunity to fulfill its potential as a showcase of refined and modernised French classics. When a table of 6 order around 12 different dishes and all were received favorably, you know a restaurant is doing well and in the case of Bistro Vue deceptively well.