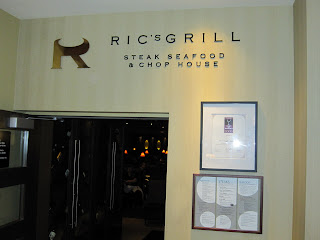 In and amongst the bars and pubs serving burgers and wings Ric's Grill looked like the kind of place that may offer a more refined dining experience in the village of Whistler.

Ski resorts are often the domain of opportunistic restaurateurs that can serve mediocre food and you know what, if you don't like it, it doesn't matter since you will be replaced with a new tourist next week.

Looking at the stylised R in Ric's shaped like bull horn's and the nice moody steak house atmosphere I thought that this may be an exception to this.

Things got off to an interesting start, our overly friendly waiter (does Northern America do any other kind??) ran through everything and recommended a local BC Wine, the Jackson-Triggs Shiraz which was decanted and seemed nice but was a bit warm. After this came a song and dance where they placed it on ice to bring down to cellar temperature but left it too long and was stone cold. 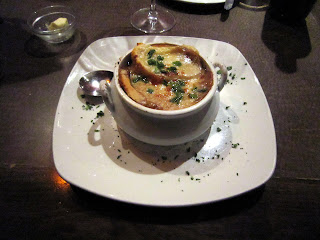 French Onion Soup au Gratin
Once the wine drama was over our first course arrived, a French Onion Soup. This is a perfect winter soup and was nice, the soup was a light onion soup with nice pieces of Gruyere covered bread 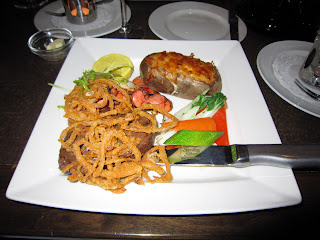 The main course came out and boy what interesting presentation, there was surf, there was turf, there was a big hot potato "thingy" and all this was hidden under an array of thin and seemingly tired fired onions.

But let's not get carried away, let's focus on the positives,

Positives
- The steak was cooked to order correctly (Medium Rare)

Negatives:
- Steak was very chewy
- Nova Scotia lobster tail was WAY over seasoned and over cooked
- Baked potato was a dry potato sarcophagus filled with pureed potato which had the texture of baby food
- Side of drawn butter had no flavour and added no value
- Fried Onions were possibly fried the day before, or the day before that

After this we decided that we really didn't want to discover Ric's deserts and finished up. As a footnote to this we discovered the wine we had which was $70 on the menu sells for $20 in the local liquor store.

I guess Ric's fits the opportunistic category, now he just needs a franchise in Circular Quay and Las Ramblas and he can really rake it in with the 300% markups on wine.