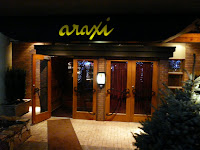 Araxi Restaurant & Bar came to my attention well before I arrived at Whistler since an executive chef position at Araxi was offered to the winner of Season 6 of Hell's Kitchen which I am a tragic fan of.

Before I arrived at Whistler I knew I had to at least pop in for quick bite to eat and see what it was like.

The fit out is nice, formal but relaxed and they cleverly have their restaurant with a seperate bar lounge that serves the same food, but in a bar layout with a TV playing ice hockey so you can dine and not miss out on the national past time. 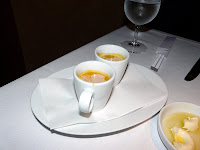 Despite making it clear to our waitress we were only going to have a few small plates, they still brought out bread and an amuse bouche which was a delightful butternut squash soup. The team here treat all diners as serious patrons, I respect that a lot. 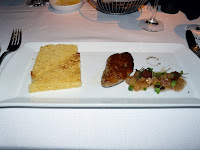 For my choice of small plate it was a no brainer, Seared Foie Gras! The place came with Brioche and an apple, pear & quince chutney to offset the richness. It was well plated and well presented, it was a lighter foie gras than I've had elsewhere but still delightful. 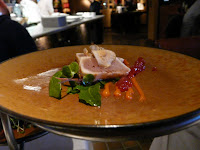 My ski friend Tim went with the Wild Seafood Trio which came out on an overly elaborate plate, but despite the OTT presentation was in his opinion top grade Sashimi and based on the small piece I tried, I absolutely agree.

Since my foie gras mission was complete, we paid our bill and moved on satisfied. On the way out I saw the winner of Hell's Kitchen 6, Dave Levey. He looked well working behind the sushi bar and has recovered from his numerous Hell's Kitchen injuries. I had a brief chat with him and got a great pic of him with a cheesy grin! 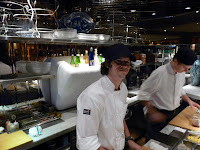 Araxi is a great place and would recommend it highly to anyone travelling to Whistler who wants a fine dining night out.