It is somewhat fitting that with the departure of Luke Mangan's name from The Palace, that the regally named John King moves in to own kitchen operations. Having worked in some impressive kitchens with the most recent being The Royal Mail Hotel, it looks like this is the opportunity for John King to make a name and reputation for himself in one of the classier gastropubs in town.

First impressions of The Palace would be that the new operators are happy to keep the fitout of The Palace intact, in fact little has changed since my last visit other than the rear wall boarded up whilst the courtyard is renovated

The menu on the other hand has had a significant overhaul and follows a very vague style of describing dishes, some are easy to interpret as to what will arrive, others gave little clue as to what would be presented. 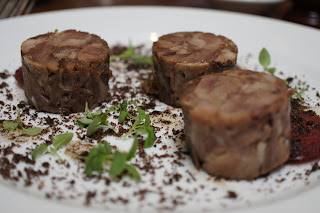 Being in an adventurous mood, I opted for an entree of Pressed Duck, Szechuan plum, coffee crumb, Thai Basil, Lemon Balm. The only thing missing from the plate was a "WIN" stamp. The very generous and well seasoned pressed duck was very tasty and the accompanying plum and coffee crumb helped to balance things out and cut through some of the fattiness. This would easily classify as a main in a lot of restaurants for size and at $21 had a lot going on. 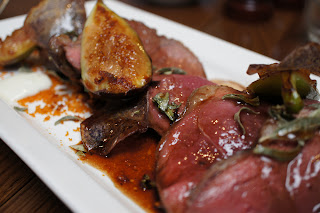 My main course described as Pan seared lamb rump, figs, saltbush, picada, purple congos, yoghurt, port reduction again gave little insight as to what would eventually arrive and the "WIN" stamp needed to come out again. The lamb rump was very rare and a bit gamy which allowed the dish to work with the figs, there was very little to criticize here and like the entree, very generous which meant of course extra red wine to assist. 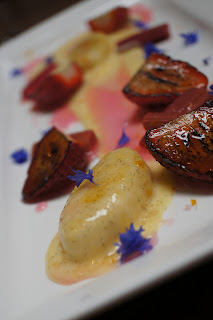 The only let down of the day was dessert, perhaps I didn't read the description close enough, creme brulee, strawberry, rhubarb generally means one thing, creme brulee with strawberry and rhubarb. Instead I got two small portions of crispy shelled vanilla bean ice cream, scorched strawberries and rhubarb. Overall it was nice, somewhat refreshing unlike the first two courses though, I wouldn't consider ordering again.

So Luke Mangan has left The Palace, the new King of The Palace is set to have a great reign based on this performance.