The casino that is commonly referred to as Australia's biggest league's club is undergoing change. A lot of change, $1 Billion of change in fact.

Part of the change alongside the facelift which is coming together nicely is to take Crown Casino's lead and build up foodie interest with some celebrity chef restaurants.

The first of these is Luke Nguyen's Fat Noodle. Located in the gaming floor of Star, it is a busy restaurant catering to gamblers in need of a recharge rather than a degustation marathon. Fat Noodle's fitout is smart and in the general theme of the new gaming floor with a menu offering a broad range of Asian dishes. 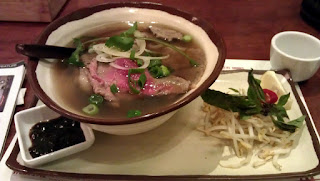 Looking over the menu, it is hard not to gravitate to the Fat Pho noodles after all it is the signature dish of the restaurant and it is hard not to like them. The generous bowl of Pho contains a great beef broth that allows one to create a "choose your own adventure" soup by adding in components as you go. A squeeze of lemon? Some mint? Chilli? All add a touch to this dish and at the risk of sounding all masterchef-y the acidity from the lemon seems to really add something to the broth.

At $17 for a bowl of Pho that I could probably get for 5 in Victoria St Richmond, it isn't cheap. But the quality is there, the extra slippery glassy noodles and tender beef make it a dish worth having if in the area. It also decisively beats anything in the food court too, until we get celebrity chef burgers in there.....