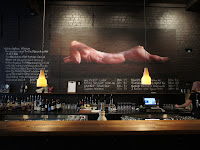 The dining experience at some restaurants are exactly what you think they will be, others are the complete opposite. Josie Bones? Undecided.

Josie Bones is the temple of meat and beer started by Season 1 Masterchef couple Chris Badenoch and Julia Jenkins. Perhaps I thought it would be a Henry the VIII style medieval feast of gluttony with a pig trotter in one hand and a pewter mug o' beer in the other. 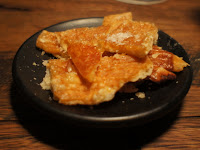 There is the pig trotter to hold whilst drinking beer from the other. However, the trotter is actually a trotter croquette and the beer comes in nice glass with the Josie Bones logo stamped on in. Gluttony refined.

While on the subject of beer, there is an extensive beer list of both tap and bottled beer with some great local microbrewers and a good overseas contingent. They offer some unique experiences such as a glass of the Infinium joint collaboration between Weihenstephan and Samuel Adams. At $13 for a champagne glass it is a clear expression of how serious beer is treated here, good on them.

Back to the food though, the crackle of the day which was pork came out dry, crispy and flavoursome - good start. Following this was the Trotter croquette's serving up gelatinous, tasty meat encased in a crispy breadcrumb shell. I would have liked a bit more meaty chunkiness, but overall quite nice. It paired paired well with the romesco sauce, not very Henry the VIII at all. 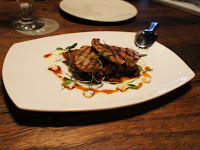 Next course of lamb tongue on spicy eggplant was served, the tongue was well cooked with great flavour and that unique tongue texture. The spicy eggplant was nice and rich and overall the dish presented well, something that tongue has a hard time doing. 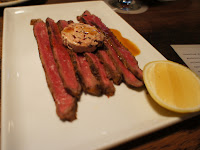 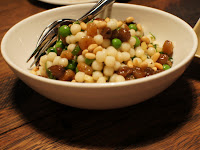 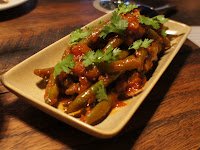 Wrapping things up we went with the special of the day and two sides that our waitress Sara recommended. On the topic of staff which I normally don't go in to too much detail on, the staff at Josie Bones are all very good. Sara knew the menu back to front and was passionate about both the beer and the food. James the bar/beer manager also came over for a quick chat and was also very friendly, saw the camera and asked about the name of the blog, guess it is obvious these days. Thumbs up for the friendly staff, not like the "elitism" one finds at places like Bar Lourinha or Mamasitta.

Back to the food though, the sides were good, but were still just sides. The moghrabieh was refreshing after the meaty dishes with the mint resetting the palate. This came in handy since the final course of meat was the highlight - Dry aged skirt steak, aged for 2 years served rare with marrow butter. The meat melted and had a richness that you only get from a ridiculous length of dry aging and the marrow butter added richness. Despite just 6 slivers served, the richness made it more than filling.

So after enjoying some nose to tail eating, Josie Bones offered the choice of meats that I expected but served and presented in a much more refined way than I expected. So is it what I expected? No, but am I disappointed? Absolutely not. Will be going back and most likely sooner than later.