I came across Gisborne Peak Wines in a most unusual way. Generally people hate buying gifts for me as I am the person who has everything, and quite often a backup as well. The clever folk at Gisborne Peak Wines have a novel “Adopt A Vine” program which they market as the perfect gift for “those who have everything” and to their credit I didn’t have one of those!

It has taken me a while to visit my adopted vine, close to 18 months in fact. A combination of being about 90 minutes from home and having a wife completing her masters meant it hasn’t been the easiest place to get to for a lazy Sunday lunch.

Fortunately 2011 is masters free so on a very mild January afternoon we headed off and arrived at the nice cellar door and restaurant. 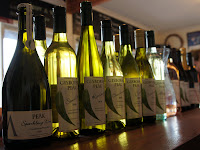 The cellar door at Gisborne Peak is laid out like most smaller cellar doors, rustic wood counter, bottles on the bar and staff running around topping up tasting glasses. The staff behind the counter were all very friendly and knew their stuff but were in no way snooty. They were more than happy to let you taste the range, there was no charge for tasting and would let you go at your own pace. This is very different to some of the cellar doors in the Yarra Valley who charge or Mornington who can possess a decent amount of attitude as if they were god’s given gift to wine.

The range of wine was quite broad with greater diversity in white over red. Across the board they were all of high standard and each one showed good varietal character. In particular I fancied their chardonnay, both oaked & unoaked, and their pinots. The 2009 unoaked chardonnay is a crisp wine with crunchy acidity and apples and peach in the palate, the 2007 oaked is more of a mellow mouth filling number which had a subtle amount of oak and malolactic fermentation butteriness present.

Their pinot noirs are good medium bodied pinot, not big heady damp hay stuff, but more cherry and fruit driven. Also enjoyable was their pinot rose which features light strawberry fruitiness and a dry finish - here's hoping we get some weather over the next few months to enjoy it.

After tasting the range of wines, it was time to sit down with some red wine and one of their wood fire oven pizzas. We had the prawn pesto and BBQ chicken pizzas and a side of chorizo.

The pizzas were of reasonable standard, the prawn & pesto was quite strong on the parmesan and garlic but had nice chunks of prawn meat, the BBQ chicken was a nice cheesy, saucy pizza with good chunks of onion in there to balance things out. I’d recommend ordering these to share and if you are like me, ask for the bases to be done crispy as I felt they could have been pushed a bit harder.

After lunch, we walked into the vineyard to check out the adopted vine. So amongst all my toys, trinkets and possessions I also have an adopted vine. We finished off the day purchasing some of the wine and talking to the owners. They are nice guys and are committed to what they do, it shows as their wines are enjoyable and they plan on growing and improving. Wish them the best, they are well placed as some clever Davids in an industry of Goliaths.

Gisborne Peak Winery is certainly worth a visit for those who like their whites and pinot noirs. Pleasant place for lunch too.