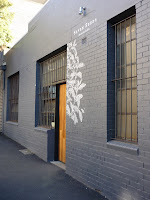 Seven Seeds is the latest venture for Mark Dundan who seems to have a knack for creating cafe gold in the most unlikely places. There is the back alley St Ali, the tiny shopfront of Brother Baba Budan and his most recent development is located in the industrial streets of Carlton - Seven Seeds. 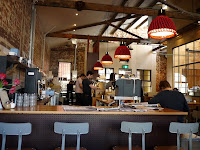 If you have been to either of the two predecessors, then you will know what to expect, an open layout, bare floors, bare brick walls, seats and tables that look like they are either from a high school chemistry lab or canteen from a 70's era car manufacturer with a good mix of music playing over the top.
My visit to Seven Seeds was nice and early so there were plenty of seats to choose from and there were a lot of familiar faces working behind the espresso machines that have followed Mark as he has opened his new haunts. 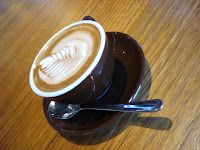 STRONG FLAT WHITE
But while aesthetics are all as expected, the important thing here is, how is the coffee? My first coffee ordered was a strong flat white. If McDonald's is the benchmark of consistency between venues for burgers, you could almost say the same for the coffee here vs St Ali vs Brother Baba Budan and that is not a bad thing at all. The coffee was delivered well presented, perfect layer of latte art for a flat white, immediately sippable but not tepid and well balanced. Not too bitter, with some nuttiness and a slight sweetness. 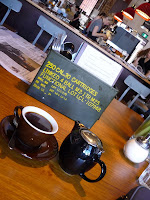 CLOVER COFFEE
The follow up coffee is a clover coffee, todays bean is the Hartmann Honey single origin which is served black in a small pot more like a tea than a regular espresso. For the unitiated, Clover Coffee is a french press style coffee, but uber-high tech. The machines start at around $11,000 so is a bit more than a pyrex plunger. The result is a much more subtle coffee that has a nice well rounded flavour, the sweetness of the coffee comes through and leaves a much milder aftertaste compared to an espresso. It is a coffee to be thoughtfully drunk rather as opposed to the espresso which is more of a sip and go. 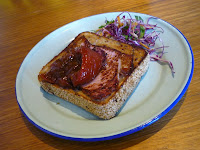 EGYPTIAN EYE PRESSED SANDWHICH
Food here is also worth considering, the egyptian eye comes as a pressed sandwhich with bacon and chutney with the "eye" being a egg fried a hole cut from the centre of the inch thick slice of bread. Quite clever and tasty.

Give it a few months and this place will be as hard to get a seat as the other two venues, another job well done.