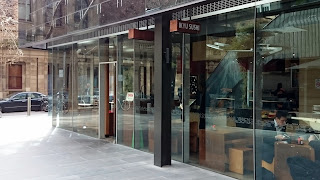 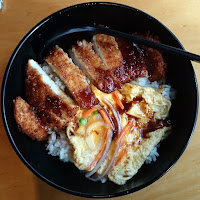 
The latter statement is my view of of Ikyu Sushi. I ended up at Ikyu after learning that Paco Tacos is only open on Fridays in winter.

After mulling over my options, $8.90 katsudon seemed like a good deal. Katsudon is a nice wintry dish that I interpret as the Japanese equivalent of a chicken parma, except with pork schnitzel and on rice.

Anyway, the bowl arrived promptly and the cutlet was quite nice, crispy and not grisly. The egg was on the side, not on the cutlet and the onion was raw. It seemed more of a "my take on katsudon" rather than an actual katsudon. The omellete was too thick and there was not enough sauce to give flavour to the generous bowl of rice.

So Ikyu is good value for $8.90 compared to similar cafes selling a sandwich, but it is not a good value katsudon, it is a pretty inferior knock off that I wouldn't return for.

Middle of the road at best