If you want a reason to go to Newmarket Hotel in the less salubrious end of Inkerman St, I'll give you two words "Paul Wilson".

For those who have followed the Melbourne restaurant scene over the past decade, Paul Wilson has built a formidable track record of creating successful restaurants - Georges, Radii, The Botanical, Half Moon, Middle Park Hotel and the list goes on.....

My first encounter with Paul's food was in the heady days of Radii where he built up the Park Hyatt's restaurant to three hat status. I still have very fond memories of my dining experiences there as well as Half Moon so a trip to Newmarket was somewhat inevitable.

First impressions of Newmarket? The fit out is very smart and seemed somehow familiar, when I discovered it was the same folk who did the Royal Saxon, the similarity was easy to see. Front of house greet us as we enter and are quick to explain that menu in Newmarket is the same no matter where you sit, stool, bench seat or comfy leather restaurant chairs.

Seated in one of the comfy swiveling chairs we were greeted by our waitress and ordered a glass of 2 Brothers The Chief from well selected beer list and perused the single sided A3 menu.

I've heard that Newmarket's menu is described as Cal-Mex which would be best describe as a light handed interpretation of Tex-Mex staples with some Spanish and Italian influences.

Starting with the pork tacos and patatas bravas. At $8 per taco, the petite tortilla's present well covered with lettuce, onion & pineapple salsa and when the pork is added creates a delicious flavour combination. The patatas bravas are well cooked, crispy and have a generous saucy kick. 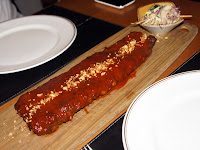 Next to arrive was the slow cooked ribs, this is one of those contagious dishes restuarants love to have. When we sat down and saw the table next to us eating them, we simply had to order them for ourselves. The dish is a site to behold, a long slab of ribs covered with bbq sauce, crushed nuts and a small bowl of apple coleslaw at the end. It is a dish that tastes as good as it looks, juicy pork and spicy sauce with a refreshing coleslaw, just a shame it is hard to eat with dignity.

On a side note, sitting opposite us was My Kitchen Rules judge and celebrity chef Manu Feildel. I met Manu a few weeks ago at a BMW car launch and we had a brief conversation. While discussing cars, his cookbook that I bought a few weeks ago and the grand prix I asked his opinion of the restaurant - "It is l'excellent". Have to say I agree, and with so many mouth watering choices on the menu, a return is inevitable.